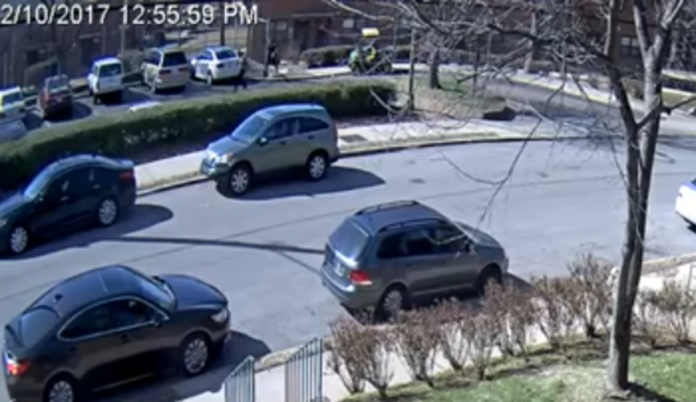 Nashville, TN — Last Friday, Jocques Scott Clemmons, 31, was pulled over for rolling through a stop sign near his home at Cayce Homes public housing development. Less than 1 minute after the stop begins, however, Clemmons would be shot in the back, dying a painful and slow death.

How exactly did a routine traffic stop turn into a police-involved shooting death? Well, if you listen to the Nashville police department’s original story, Clemmons charged at officer Joshua Lippert, causing a physical confrontation, who then had no choice but to shoot him. However, a video from the nearby housing development, released two days after the killing, tells a different story — a story in which Clemmons was shot as he ran away.

When police released the first video, it appeared to back up their claim of a physical confrontation as it was shot from an angle that made it hard to see what actually transpired. The video shows Clemmons run toward Lippert’s unmarked patrol car and then it ends.

However, the newer video showed that Clemmons never got close to Lippert and instead tried to run around him.

As the new video below shows, no struggle happened until Lippert pursued Clemmons and physically grabbed him. However, the entire time it appears that Clemmons is simply trying to get away as he knows that this meeting will likely end with him locked in a cage.

According to police Clemmons had a gun and was reaching toward his waistband. Lippert said he feared for his life and had no other option but to open fire on Clemmons. Police also claim that Clemmons was holding the gun and refused to drop it. However, if you watch the video below, it appears Clemmons was only trying to get away from Lippert. At no time did Clemmons take aim or point anything in Lippert’s direction.

As Clemmons ran from him, Lippert opens fire. Clemmons was struck twice in the lower back and once in his left hip, according to police. He later died in surgery.

“He got out of his car, left the door open, started running, police shot him in the back three times, he fell to the ground, a few police officers went over and looked at him, walked away, and that’s about it,” a witness told WKRN.

“As part of the full and accountable investigation into this matter, it is important that the community know of this new development,” Metro Police Chief Steve Anderson said in a statement after the new video was released. “The investigation is active and progressing. We are engaging with the FBI.  Citizens have my assurance that the investigation will be fair, objective and complete.”

Following the release of the new video, the ACLU of Tennessee noted that the shooting “raises serious questions” and they called for a thorough and transparent investigation, according to the Tennessean.

“The shooting of Jocques Clemmons did not happen in a vacuum,” ACLU-TN executive director Hedy Weinberg said in a statement. “While further investigation will undoubtedly focus on uncovering additional details about what occurred after Officer Joshua Lippert stopped Mr. Clemmons, incidents like these also compel us to take a step back and ask why Mr. Clemmons was stopped in the first place and how officers make decisions about who to stop for minor traffic infractions. Anyone discretionary stop risks a tragic ending if there is an escalation of conflict – far too frequently such escalations result in police use of force, and also expose police to unnecessary risk.”

Immediately after the shooting, local media, with information from the police, put out a story calling Clemmons ‘a gunman’ — in spite of the fact that Clemmons was not the person who fired the shots. The local media was also given Clemmons’ criminal history by police in an apparent character assassination to justify his death.

Clemmons, who was by no means perfect, does have a criminal history. However, most of his charges are for misdemeanor traffic violations and a drug charge. He also pleaded guilty to the misdemeanor charge of aggravated assault in 2012.

Conveniently left out of the original news story was the fact that Lippert also has a tainted history. Lippert, who was officer of the month in 2014, has also been in trouble with his own department, multiple times.

Lippert, 32, has spent 20 days suspended for various police code violations, including two instances involving physical use of force, according to Metro police records.

As the Tennessean reports, in October 2015, Lippert used physical force to pull a black motorist from the vehicle during a traffic stop, even though the driver said he’d be willing to get out in the presence of a supervisor. Lippert was also reprimanded for having the man’s car towed without giving him a chance to park the car or turn it over to someone else.

In another case, the officer was reprimanded when he “created the necessity to use force against an intoxicated subject” who was being arrested, according to the disciplinary record, according to the Tennessean. That subject was white.

A GoFundMe account has been set up for his funeral which will be held on Feb 18th. As of Friday, the response has shown to be overwhelming and they family has reached their goal.

Could Clemmons, who left behind two young children, have reacted differently and still be alive? Absolutely. However, does that justify his death?

Sadly, several people took to the comments of Clemmons’ GoFundMe page to let the family know that, ‘yes’, Clemmons running from the officer did justify his death. What do you think? Let us know in the comments below.

NASA Has Confirmed That Earth Now Has A Second Moon That’s Here To Stay...

Oklahoma Residents Were Sent To Christian Slave Camp Instead Of Prison: ‘They work you...