Home Drug War Trump Wall Should Be Built Because Nukes Could Be Smuggled in Bales... 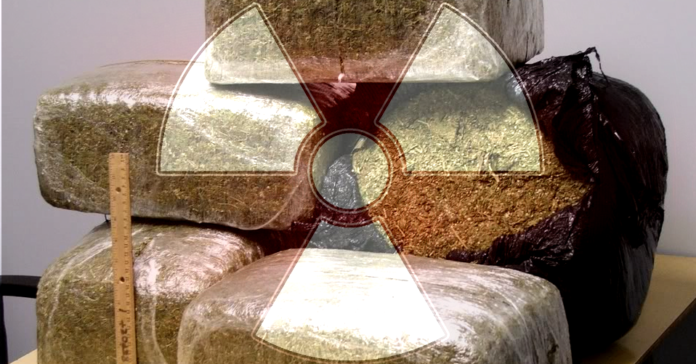 In a TV interview, Representative Franks states, “Isreal has demonstrated the efficacy of a barrier, a physical barrier… The reality, Brianna, is that we have to measure all of the costs, ancillary and otherwise, and make the best decision that we can. But I can suggest to you that there are national security implications here for a porous border. You know we sometimes used to make the point that if someone wanted to smuggle in a dangerous weapon, even a nuclear weapon, into America, how would they do it? And the suggestion was made, Well, we’ll simply hide it in a bale of marijuana.”

Watch the interview clip below.

The isn’t the first time Trent Franks made this ridiculous argument. Here is a 2012 speech quote from his own website:

“Specifically imagine for a moment, Mr. Speaker, the scenario of Hezbollah, one of Iran’s terrorist proxies, gaining possession of just two nuclear warheads and bringing them across the border into the United States concealed, say, in bales of marijuana; then transporting them into the heart of two different, crowded, unnamed cities. Then calling and telling the White House exactly when and where the first one will be detonated, and then following through 60 seconds later.”

What’s your opinion on the Congressman Franks hide-nukes-in-marijuana conspiracy theory?

Glyphosate Herbicide Will Cause Half Of All Children To Have Autism By 2025 –...