Home News Man Who Murdered Mike Brown Admits Everything You Think You Know About... 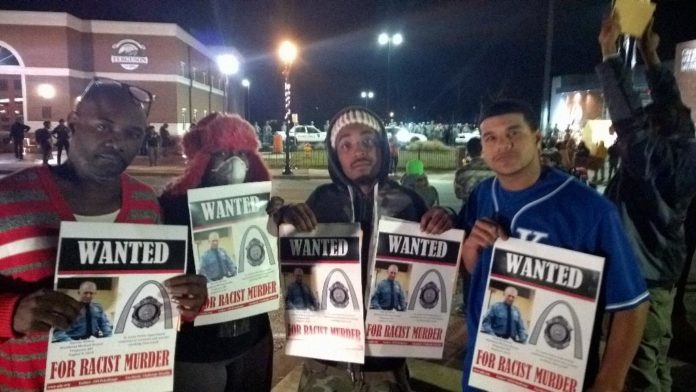 We have been fed a fairy tale version of the murder of Mike Brown from the beginning, but now the truth is coming out.

The story of the death of Mike Brown we were told goes like this:

One sunny day in Ferguson, Mo., a huge behemoth of a man named Michael Brown walked into a convenience store; committed a strong-arm robbery, escaping with the invaluable loot of a pack of cigarillos; and while he was walking home, Darren Wilson, a brave cop responding to the robbery, stopped him, reported.

When Wilson tried to detain Brown, Brown reached for the cop’s gun and the policeman shot him. But Brown wouldn’t quit, and the officer thought that Brown might have a weapon, so Wilson shot a few more times to stop Brown from harming him, reported The Root.

“What happened in Ferguson is that a man committed a robbery, attempted to assault a police officer, and the police officer—to save his life—shot him. The police officer did his duty. The officer should be commended for what he did.” —Rudy Giuliani on Fox News, March 12, 2015

The reality is it didn’t actually happen that way, and Giuliani wants to commend a racist murderer.

After a documentarian released video this past weekend that dispels the myth of the Mike Brown corner-store robbery, more information is emerging about the n-word-using patrolman who was accused of racial discrimination and excessive force even before he pumped at least six bullets into Brown on Aug. 9, 2014, killing him. New court papers reveal that Brown never tried to take the officer’s gun, never struck the officer and did not initiate any contact with Wilson, who was cleared of wrongdoing by a secret grand jury in November 2014.

The Root continued their report: As part of a civil suit filed last year against Wilson, a court document reveals some stunning admissions from the former Ferguson police officer. In a court docket filed Dec. 28, the cop who killed Brown admitted to using racial slurs, cursing at Brown before he was killed and grabbing him without provocation.

According to the document, Wilson acknowledges that he spotted Brown and his friend Dorian Johnson on Canfield Drive on Aug. 9. He will not admit that they were engaged in any criminal activity other than jaywalking. He pulled his police car over, blocking the path of the teenager and his friend.

The officer does not dispute the fact that he didn’t radio anyone before stopping the two pedestrians and telling Brown to “get the fuck back” after opening the police door. It is disputed whether the door ricocheted back into Wilson or whether Brown closed the door himself, but the policeman goes through the details of the encounter:

33. During this encounter you reached through the window.

34. During this encounter you grabbed for Michael Brown’s body.

35. During this encounter you grab for Michael Brown’s clothing

So what we have so far according to the officer is 2 men walking down the street. A cop pulls in front of them, blocking their path. Instead of calling for backup or radioing in a traffic stop as normal procedure would dictate, he opens his car door and either Brown closes it or it ricochets off of Brown’s body. The officer then chooses to reach through his window and grab for Brown’s body and forearm.

The next section of the document contains a stunning admission that contradicts the original story we have been fed. 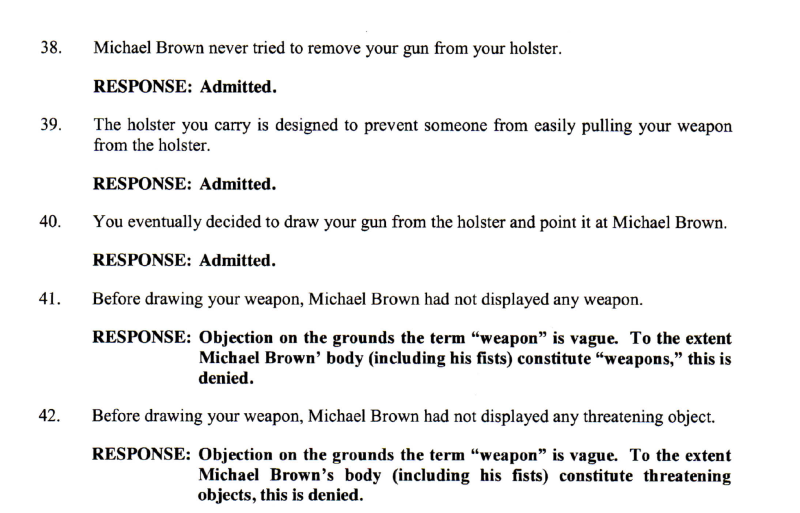 Now we get to the truth of the matter, Brown did not reach for the officer’s gun, and the cop admits that Brown’s only weapons were his terrifying black hands. The document goes on to show that—instead of reaching for his pepper spray, baton or Taser—Wilson pulled out his gun and shot Brown, even though Brown had not reached for his weapon or struck him, and Brown was only near the officer because the officer drove up next to him and grabbed his arm.

The next part of the testimony will confound the conservatives who stated that Wilson did not shoot Brown in the back. Wilson admits that after the first shot, Brown started running away from him and he fired another shot, which missed Brown. Wilson basically admits that he fired at Brown and the bullet hit a building close by.

Wilson agrees that after the second bullet was fired, the teen turned around, faced the officer and—although Wilson was trained in “defensive tactics and techniques”—began shooting as soon as Brown started running toward him.

The deposition goes on reveal the past of the racist officer and his regular use of excessive force. It also reveals other racists at the Ferguson PD. 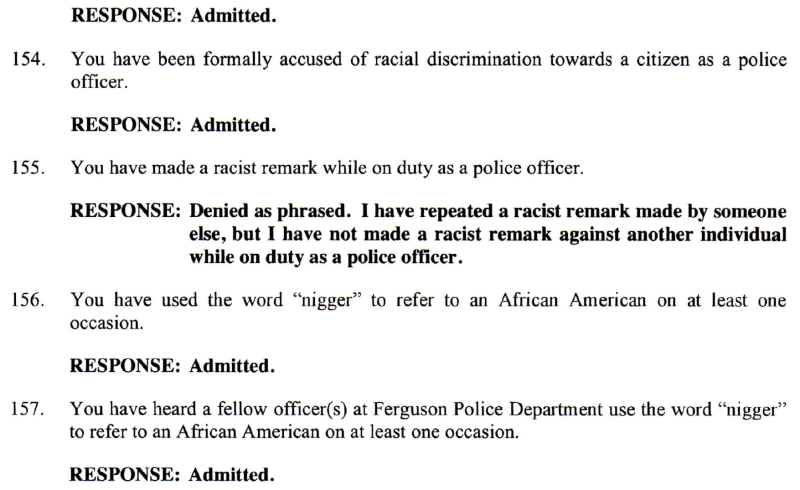 Even though the truth has been revealed about the murder of Mike Brown, his family continues to suffer because of their loss.  Meanwhile, the man who murdered him lives in the house he bought with the $500,000 in donations he received from fellow racist supporters.

Someone Finally Explained How ISIS Was Created, and it Will Make You Question Everything...