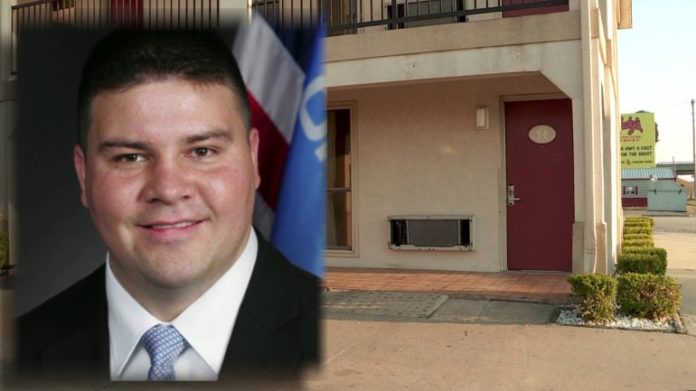 An Oklahoma state senator, an outspoken supporter of President Trump, is under investigation after he was found in a motel room with an underage boy. Police consider the underage boy a prostitute.

Police officials in the Oklahoma City suburb of Moore are still investigating the circumstances surrounding an incident last week involving Republican Sen. Ralph Shortey and a teenager. No charges have been filed.

KJHR reported the State Senate voted 43-0 Wednesday for a resolution that imposes a series of punishments on the Republican from Oklahoma City. The resolution accuses Shortey of “disorderly behavior.”

The 3 charges Moore police are recommending against Shortey include soliciting prostitution of a minor, prostitution within 1,000 feet of a church and transporting for the purpose of prostitution.

Officials say Sen. Shortey was found inside a Super 8 Motel in Moore with a 16 or 17-year-old boy.

Police are reviewing text messages between Senator Shortey and the teen. District Attorney Greg Mashburn says the texts led the teen’s family to contact police. It’s unclear what was in the messages or the nature of the texts.

Police were called for a welfare check at the motel on March 9th.

Police say, before entering the hotel room, they smelled “a strong odor of raw marijuana emitting from the hotel room.” After searching a backpack, police found an open box of condoms and lotion.

Senator Shortey is married with children. He was first elected in 2010 and recently received attention for controversial bills. He served as a political consultant for Representative Dan Kirby during the sexual harassment scandal at the capitol earlier this year.

The Oklahoma Democratic Party Chair is calling for Senator Shortey to suspend himself from senate activities until the investigation is complete. He has not been arrested or charged with any crime.

“This is far worse than anything that we saw in the last couple of months with the special committee,” Oklahoma Democratic Party member Sarah Barker said.

The politician, who is also a member of Trump’s state transition team, has not commented publicly about the situation and subsequent questioning by officers.

The chairman of the Oklahoma Republican party, Pam Pollard, made a statement regarding the pending charges against Senator Shortey.

“We condemn the actions of Senator Ralph Shortey to the strongest degree,”said Chairman Pollard. “While we believe in the right to a fair trial and that all people deserve their day in court, the accusations against Ralph Shortey are in no way in line with the principles of the Oklahoma Republican Party.”

“No person, particularly a child, should be subjected to sex crimes,” said Chairman Pollard. “The Oklahoma Republican Party stands in support of efforts to protect children, families and victims of sex crimes. Clearly, we are horrified by the allegations against Senator Ralph Shortey and that he may have taken detestable actions against children. If proven to be true, appropriate justice should be served.”

Twin Sisters Once Bullied For Their Unique Hair Are Now Famous Because Of It...