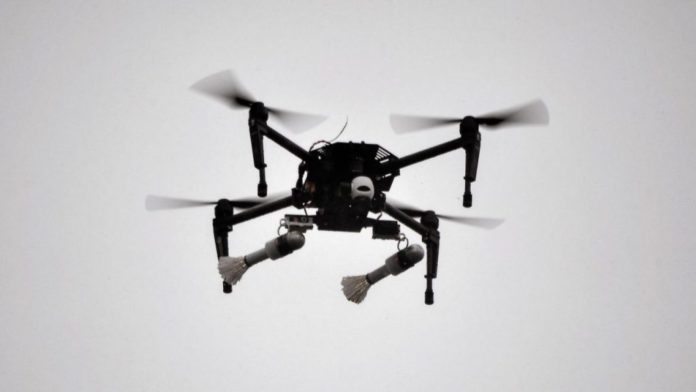 Connecticut lawmakers are considering a bill that would allow police to arm drones with deadly weapons.

If passed, the state would become the first in the country to allow police to use drones outfitted with deadly weapons, a proposal immediately met with serious concern by civil rights and liberties advocates.

The bill authorizing police use of “deadly” drones passed 34-7 in the state Legislature’s joint Judiciary Committee Wednesday. It is now pending action by the state House of Representatives, where it will be sent for debate and a vote, neither of which has been scheduled, according to The Root.

The bill would ban the use of weaponized drones, but exempt police. Details on how law enforcement could use drones with weapons would be spelled out in new rules to be developed by the state Police Officer Standards and Training Council.

Members of the Joint judiciary committee claim the deadly drones are intended for rare occasions, but many other are not so sure the police would abide by those suggested limitations.

“Obviously this is for very limited circumstances,” said Republican state Sen. John Kissel, of Enfield, co-chairman of the Judiciary Committee that approved the measure Wednesday and sent it to the House of Representatives. “We can certainly envision some incident on some campus or someplace where someone is a rogue shooter or someone was kidnapped and you try to blow out a tire.”

Fortune magazine reported when Dallas police used a robot to kill a cop-killer during a standoff. The magazine asked: Does it really make a difference if they (police) use a drone—rather than a sniper rifle?

North Dakota is the only state that allows police to use weaponized drones, but limits the use to “less lethal” weapons, including stun guns, rubber bullets and tear gas.

The ACLU is opposed to the bill which would encourage more of the already overused lethal force when it is not necessary.

“We would be setting a dangerous precedent,” said David McGuire, executive director of the state ACLU. “It is really concerning and outrageous that that’s being considered in our state legislature. Lethal force raises this to a level of real heightened concern.”

Five states — Nevada, North Carolina, Oregon, Vermont and Wisconsin — prohibit anyone from using a weaponized drone, while Maine and Virginia ban police from using armed drones, according to the National Conference of State Legislatures. Several other states have restricted drone use in general.

The NAACP believes the police would use the deadly drones to further abuse minority communities.

“We have huge concerns that they would use this new technology to abuse our communities,” said Scot X. Esdaile, president of state chapter of the NAACP.

Esdaile said he has received calls from around the country from NAACP officials and others concerned about the Connecticut legislation.

The bill also includes restrictions on drone use and reporting requirements that are supported by the ACLU.

It would require police to get a warrant before using a drone, unless there are emergency circumstances or the person who is the subject of the drone use gives permission. It also would require police to report yearly on how often they use drones and why, and create new crimes and penalties for criminal use of drones, including voyeurism.

“I think that police are taught one thing,” said Democratic Bridgeport Sen. Edwin Gomes. “You put a weapon in their hand, they shoot center mass, they shoot to kill. If it’s going to be used, you’re going to use it to kill somebody.”

This proposed bill is very concerning.   If passed, then it could set a deadly precedent for other states to follow.  If you live in Connecticut and are opposed to the bill, please contact your elected officials and let them know about it. Stopping this bill quickly and harshly could set a good precedent for people’s rights and safety all across the country.

In Under a Minute, this Cop Shows Exactly Why People are Losing Faith in...