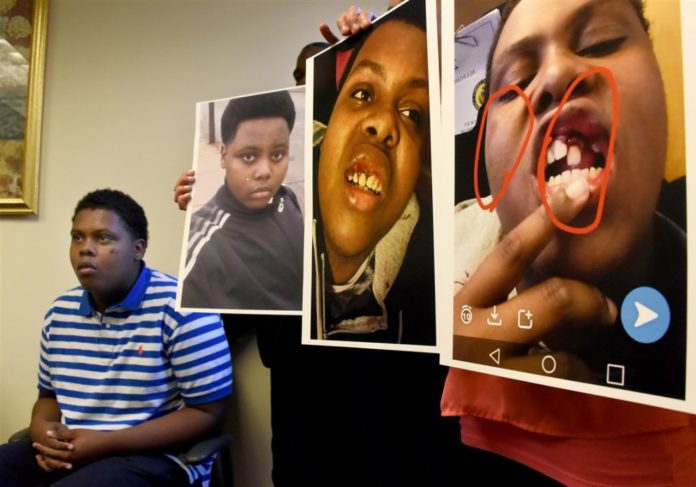 The attorney for a 14-year-old Pennsylvania high school student said that a Churchill police officer assigned to the school assaulted the young teen, threw him across the room, and  knocked out one of his front teeth during an arrest over a cell phone.

According to The Root, the incident occurred inside Woodland Hills High School Monday afternoon. Pittsburgh attorney Todd Hollis said a medical team had to reattach his client’s tooth and that the child, identified as Queshawn Wade, will need additional oral surgery for other injuries. The teen also suffered a visible cut on his left cheek.

“How hard does a person have to hit a child to knock their tooth completely out of their mouth?” Hollis said. “What does a child have to do to justify that response?”

Woodland Hills Superintendent Alan Johnson acknowledged that the student was injured as he was being taken into custody by a school resource officer.

“I do understand that the student was injured. And that’s unfortunate,” Johnson said.

Queshawn has been suspended from school, but Johnson will not give any details on why.

Hollis said the incident started with accusations that the teen had stolen a phone from another student. Police Officer Steve Shaulis started to question the boy and then the conversation deteriorated after the officer allegedly called Queshawn a homophobic slur.

Shaulis then punched the teen and threw him across the room and into Shaulis’ office at the school, according to the report. School Principal Kevin Murray also questioned the teen about the missing phone.

“He was punched in the teeth, which is where his tooth fell out, and then he was placed on his stomach where he was later arrested and handcuffed,” the attorney said. “At this point, we don’t know what the charges are. He was taken to the hospital by ambulance.”

Murray’s lawyer, Phil DiLucente, said in a statement Wednesday that the principal had nothing to do with the incident.

“The allegations as framed today with respect to Principal Kevin Murray are completely incorrect and wrong,” DiLucente said. “My client was not involved in the incident, and casting his name in this light with respect to the alleged incident is not only inflammatory but completely unnecessary and only done to damage his reputation.”

Hollis countered that there are video cameras whose footage should show at least parts of the altercation, and he asked the school district to release the footage.

“If you have nothing to hide you should show everything,” he said. “I could care less about the phone. The issue here right now is the assault of this young man.”

The New Travel Ban You Didn’t Hear About Is Against U.S. Citizens – Anti...