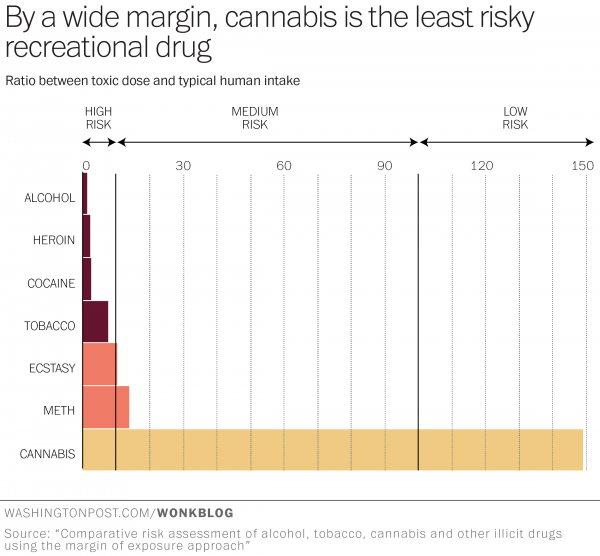 The hypocrisy of many prohibitionists who condemn legal cannabis by day while imbibing on beer, wine and liquor by night was highlighted recently after researchers demonstrated that alcohol is one of the most dangerous drugs available, exceeding both cocaine and heroin in terms of mortality risk.

A comparative risk assessment that looked at the safety profiles of a number of popular drugs found that alcohol is the real scourge to society, as is tobacco, both of which fall into the “high risk” category, as defined in the study. Cannabis, on the other hand, is orders of magnitude safer than practically every other “substance” that society views as a “drug.”

Each of these substances ranked as “high risk,” though on a population scale only alcohol was determined to be “high risk,” meaning it is even more dangerous than cocaine and heroin. Nicotine from tobacco ranked in the “medium risk” category, and all the way on the other end of the scale was THC, or tetrahydrocannabinol, the primary psychoactive component of cannabis — THC barely even registered on the risk scale; it’s that safe.

For a visual, check out the following graph which illustrates the relative safety of cannabis compared to legal substances like alcohol and tobacco:

“[T]he MOE results point to risk management prioritization towards alcohol and tobacco rather than illicit drugs,” wrote the authors about their findings, as published in the Nature subsidiary journal Scientific Reports. “The high MOE values of cannabis, which are in a low-risk range, suggest a strict legal regulatory approach rather than the current prohibition approach.”

Alcohol is far more dangerous than most people realize

The fact that cannabis was shown in the study to be an astounding 114 times less deadly than booze — and in all reality, cannabis has never been shown to cause physical harm or death, ever! — proves that something is terribly wrong with our current laws at both the state and federal levels.

The deadliest of the most popular drugs, alcohol, flows freely across America, while a plant that is completely safe and highly medicinal is still treated as the most harmful of them all. Cannabis is the only substance among all those evaluated in the study that the federal government classifies as Schedule I, with “no currently accepted medical use.”

This designation is completely bogus, of course, as the health benefits of cannabis are extensive. Cannabis is widely known to help relieve pain and nausea, prevent seizures, promote calm and clear thinking, and even stop the growth and spread of cancer, as documented in multiple studies.

“Modern research suggests that cannabis is a valuable aid in the treatment of a wide range of clinical applications,” explains NORML. “These include pain relief — particularly of neuropathic pain (pain from nerve damage) — nausea, spasticity, glaucoma, and movement disorders.”

“Marijuana is also a powerful appetite stimulant, specifically for patients suffering from HIV, the AIDS wasting syndrome, or dementia. Emerging research suggests that marijuana’s medicinal properties may protect the body against some types of malignant tumors and are neuroprotective.”

Recognizing the inherent medicinal benefits of cannabis, conservative politician David Simpson, a Republican from Texas, recently introduced legislation that would completely abolish cannabis prohibition in the Lone Star State. If passed, House Bill 2165 would treat cannabis like any other plant, allowing people to grow, use, buy and sell it without government interference.

Police In North Dakota Now Have Weaponized Drones, Because What Could Possibly Go Wrong?...