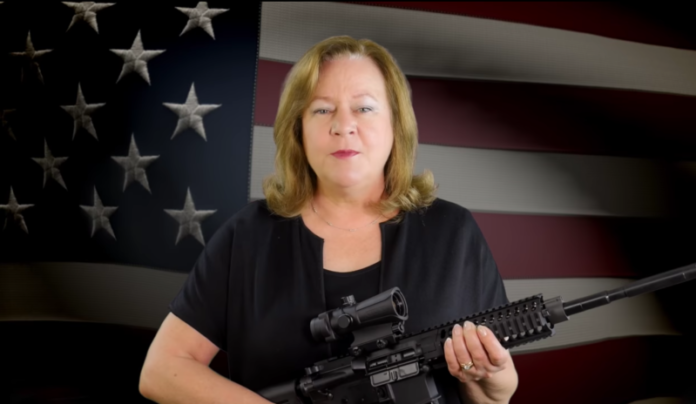 This woman is pretty much the exact opposite of what America needs to be great.  More racist, homophobic bigots will only make America worse and people need to shun them rather than elect them.

An openly prejudice South Carolina woman campaigning for an open seat in the House of Representatives has reignited the debate over the Confederate flag, is very anti-LGBT, and echoes Trump’s slogan “Make America Great Again” in a series of ads that is probably the most racist and homophobic campaign in recent history.

Sheri Few is 1 of 7 Republican candidates running in the special election for South Carolina’s 5th Congressional District—a congressional seat vacated when Rep. Nick Mulvaney (R-SC) stepped down to join the Trump administration as director of the Office of Management and Budget, according to The Root.

In a series of campaign ads and public appearances, Few has reiterated her prejudice, pro-Trump agenda, saying she “will not only make America great again, but she will make America America again.”

Michael Harrlot for the Root writes:

“I really don’t know what that means, because I’m black and the high-pitched racist dog-whistle politics are not meant for my ears, but I know it is shady by the way the Caucasians in the crowd clap and nod their heads when she says it.”

Few came out of the gate shooting at everybody. No, really—in her first campaign ad she literally opens it holding an AR-15 (the preferred weapon of school shooters and white separatists). After introducing herself, in her next ad, she just goes on an extended rant about liberal ideas, small government, Common Core, family values and all the other crazy things the people whose necks are the same color as Trump’s jowls believe are plaguing this country. She peppers the video with the subconscious images of the terrible, terrible things that make wypipo want to throw up in their mouths: Barack Obama bowing to a Muslim leader; an Islamic State group beheading; a bulldozer removing a statue of Robert E. Lee; and a picture of a gay soldier (How do we know the soldier is gay? The soldier has a rainbow patch on her uniform because, apparently, in Sheri Few’s America, homosexuality is a sin, but you can get a military medal for it).

You can find a number of incidents of Few speaking about her values, from talking about Michelle Obama not being a patriot, to saying that young people want to destroy America by voting for Bernie Sanders, and that school systems are not teaching Christian values anymore.

But the pièce de résistance to Few’s wacky, conservative campaign is her repeated blasting of the politicians who voted to remove the Confederate flag from South Carolina’s Statehouse. That’s right, If you don’t believe her campaign should be called “racist”—consider this: Sheri Few is arguing for the rebel flag.

“I saw it as a very weak, politically correct move on behalf of the legislators and the governor,” said Few, throwing shade at her fellow GOP opponents, Ralph Norman and Tommy Pope. “My issue is more about history and total, not just the flag itself. I also know there are many people who fly the flag in their yards or have a symbol on their truck, and it’s not a racist symbol to them, it’s about their Southern heritage.”

Notwithstanding the fact that South Carolina is in the South and has its own flag (something the people arguing for “Southern heritage” never address), Few even dismissed the white supremacist with a Confederate flag who went into a church in her state and shot nine black people as they prayed, instead saying the banner was removed because of political correctness. “Weak politicians are too quick to blame a horrible tragedy on a flag or a gun or even free speech, and that’s how bad laws are made,” Few said.

As you can imagine, the people at Charleston’s Emanuel African Methodist Episcopal Church didn’t take too kindly to the politician’s inferences, issuing a statement that basically said, “Keep the Emanuel Nine’s names out of your mouth:

“To be very honest, the events of a racist committing murder is something that should never be utilized to advance someone’s political career,” said the Rev. Eric Manning, pastor of Emanuel AME Church, where Dylan Roof killed nine parishioners in June 2015.

The special election primary for South Carolina’s 5th Congressional District seat will be held May 2, and the final election will take place June 20.

It does seem unlikely this bigot could win an election with rational voters, especially with 6 other competitors, but it is a possibility. She could be one of the people voting on important things for all Americans, and that should not happen. A clearly prejudice person should not be making laws.

[WATCH] This Man Wants You to Know What It’s Like to Be Shot in...

40 Different Studies that Confirm GMO Foods are Destroying Your Health & Cause Cancer...