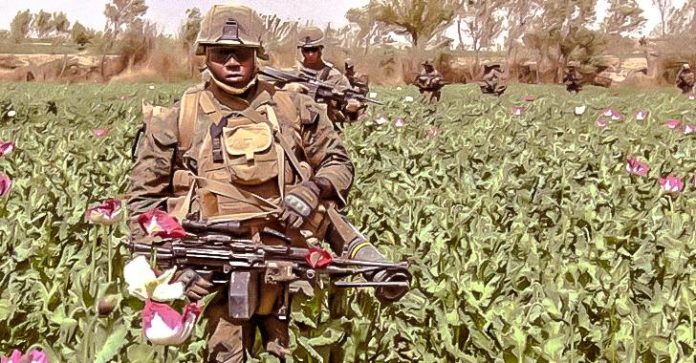 When the U.S. overthrew the Taliban in the wake of 9/11 as part of its newly launched “war on terror,” it set the stage for the explosive growth of Afghanistan’s dying opium industry. A few short months before the invasion took place, the Taliban made headlines for having “dramatically ended the country’s massive opium trade” after the leader of the fundamentalist group had declared the substance to be un-Islamic. At the time, Afghanistan’s opium was used to produce 75 percent of the world’s heroin.

But despite being squashed by the Taliban, the opium market made a dramatic comeback immediately following the U.S. invasion in October 2001. Not only was the opium trade restored, it surged drastically – rising from a production level of 185 tons under the Taliban (before the production ban) to 3,400 tons in 2002.

Over a decade later, the amount of opium harvested annually continues to rise. Afghanistan’s opium is now used to produce 90 percent of the world’s heroin. This increase has been directly overseen by U.S. forces, who openly guard Afghanistan’s poppy fields. Indeed, during that same time, the U.S. government claims to have spent $8.4 billion on counternarcotic programs within Afghanistan.

The dramatic increase in opium production in post-invasion Afghanistan has sparked speculation regarding the motives behind the aggressive action that the U.S. has recently taken towards North Korea, which is also a major opium producer.

While government-sanctioned opium production took a hit after Kim Jong-un assumed power in 2011, things have changed drastically in recent months, largely due to Chinese sanctions that were announced in mid-February. The sanctions, created in response to a North Korean ballistic missile test, led China to refuse imports of North Korean coal. Coal represents 40 percent of North Korea’s exports to China.

That drastic hit to the North Korean economy has apparently forced Kim Jong-un’s hand, as opium production has once again picked up. Kang Cheol-hwan, a North Korean defector and president of the North Korea Strategy Center, told the Yonhap News Agency that “the North is cultivating poppy fields again for drug smuggling as a way to secure funds to manage its regime.”

While North Korea’s opium production is small compared to that of post-invasion Afghanistan, it is still significant. North Korea, according to the Chosun Ilbo, produces around 40 tons of opium annually — comparable to Pakistan’s opium industry. Most of its opium is smuggled into and sold in China and cannot be targeted by sanctions, since it is hard to trace on the black market.

Some have speculated that North Korea’s return to opium production has caught the attention of the CIA, as the intelligence agency has a history of involving itself in opium trade and drug-running in general, as evidenced by its well-documented habit of managing drug supplies from Latin America to Asia.

In addition, opioid addiction – in the form of both legal opiate painkillers and illegal drugs – is growing out of control in the U.S., with more opium being consumed within America than ever before. The onset of this epidemic coincided with the U.S.’ occupation of Afghanistan as, between 2002 and 2013, U.S. heroin use jumped by 63 percent, reaching a 20-year high. Heroin overdoses quadrupled in the U.S. within that same timeframe.

The U.S. government’s actions also suggest that it seeks to protect opium production, as has been made clear in its occupation of Afghanistan. For instance, the U.S. vehemently opposes opium legalization efforts and the State Department refuses to acknowledge eradicating opium as a primary goal, despite the billions that have been spent on counternarcotic programs.

With tension increasing on the Korean Peninsula, the U.S. has put “all options on the table” in order  to prevent further missile tests and “provocations” from the Kim Jong-un regime, including warnings that the U.S. may soon find itself in a “major, major conflict” with North Korea.

If North Korea finds itself targeted for regime change, history suggests that the U.S. military may end up guarding its poppy fields as well.