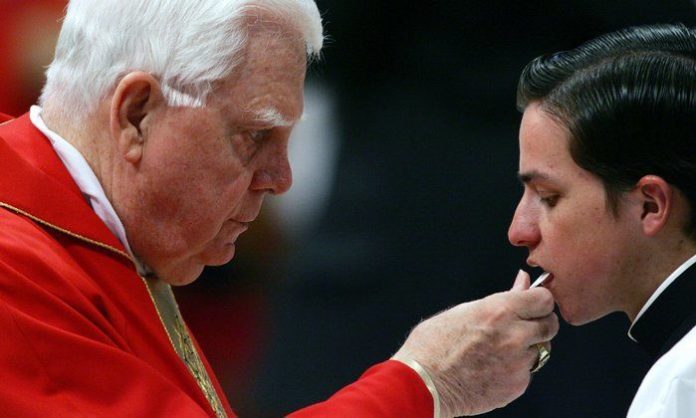 Cardinal Bernard Law, who was forced to resign over sexual abuse scandals in his Boston archdiocese, where 150 priests were accused of molesting children. (Photo: Thomas Coex / AFP / Getty)

The Catholic church is telling newly appointed bishops that it is “not necessarily” their duty to report accusations of clerical child abuse and that only victims or their families should make the decision to report abuse to police.

A document that spells out how senior clergy members ought to deal with allegations of abuse, which was recently released by the Vatican, emphasised that, though they must be aware of local laws, bishops’ only duty was to address such allegations internally.

“According to the state of civil laws of each country where reporting is obligatory, it is not necessarily the duty of the bishop to report suspects to authorities, the police or state prosecutors in the moment when they are made aware of crimes or sinful deeds,” the training document states.

The training guidelines were written by a controversial French monsignor and psychotherapist, Tony Anatrella, who serves as a consultant to the Pontifical Council for the Family. The Vatican released the guidelines – which are part of a broader training programme for newly named bishops – at a press conference earlier this month and is now seeking feedback.

Details of the Catholic church’s policy were first reported in a column by a veteran Vatican journalist, John Allen, associate editor of the Catholic news site, Cruxnow.com.

Allen noted that a special commission created by Pope Francis, the Pontifical Commission for the Protection of Minors, had appeared to play no role in the training programme, even though it is supposed to be developing “best practices” to prevent and deal with clerical abuse.

Indeed, a church official familiar with the commission on abuse said it was the committee’s position that reporting abuse to civil authorities was a “moral obligation, whether the civil law requires it or not”. The official said the committee would be involved in future training efforts.

The current guidelines written by Anatrella make only passing references to prevention policies. The French monsignor is best known for championing views on “gender theory”, the controversial belief that increasing acceptance of homosexuality in western countries is creating “serious problems” for children who are being exposed to “radical notions of sexual orientation”. He did not return a request for comment.

The guidelines reflect Anatrella’s views on homosexuality. They also downplay the seriousness of the Catholic church’s legacy of systemic child abuse, which some victims’ right groups say continues to be a problem today.

While acknowledging that “the church has been particularly affected by sexual crimes committed against children”, the training guide emphasises statistics that show the vast majority of sexual assaults against children are committed within the family and by friends and neighbours, not other authority figures.

The training course began in 2001 and has been taken by about 30% of Catholic prelates. The guidelines on child abuse was presented to new bishops last September in the annual training course organised by the Congregation for Bishops, Allen noted.

Pope Francis has called for the church to exhibit “zero tolerance” of sexual abuse of minors or vulnerable adults by clergy and that “everything possible must be done to rid the church of the scourge of the sexual abuse”.

He said in a 2012 interview – when he was still a cardinal – that he was once called by a bishop asking him for advice on how to deal with an allegation of sex abuse. Cardinal Bergoglio – as he was then known – allegedly told the bishop to take away the priests’ licences and begin a canonical trial that would deal with the matter internally.

SNAP, a US-based advocacy group for abuse victims that has been very critical of Pope Francis on the issue, said the news outlined in John Allen’s Crux article proved that the church had not substantially changed.

“It’s infuriating, and dangerous, that so many believe the myth that bishops are changing how they deal with abuse and that so little attention is paid when evidence to the contrary – like this disclosure by Allen – emerges,” the group said in a statement.

The news comes just days after the abuse commission forced one of two abuse survivors who had personally been appointed by Pope Francis to leave the committee following a vote of no confidence. Peter Saunders, a British abuse survivor and vocal critic of the church’s alleged lack of action on abuse, said he was blind-sided by the vote.

According to a recent press release over the weekend that did not mention Saunders’s removal, the committee has been busy finalising proposals for Pope Francis’s consideration, including whether the pope ought to remind all church authorities of the importance of responding directly to victims who approach them, and the finalisation of a day of prayer for victims. It is also developing a website to share best practices for children all around the world.

BREAKING: AMERICA’S MOST POPULAR CHEESE RECALLED! IMMEDIATELY THROW IT AWAY!