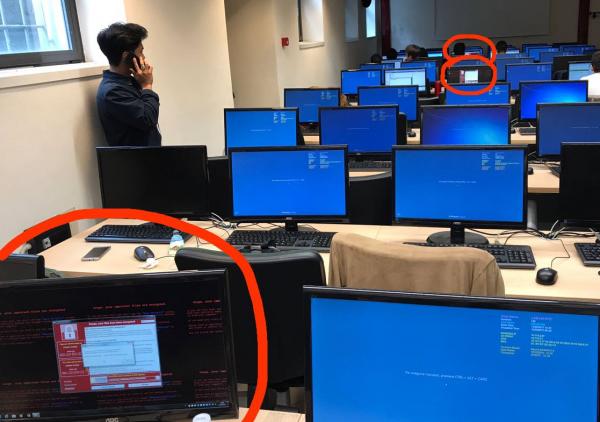 The UK National Health Service said: “We’re aware that a number of trusts that have reported potential issues to the CareCERT team. We believe it to be ransomware.” It added that trusts and hospitals in London, Blackburn, Nottingham, Cumbria and Hertfordshire have been affected and are reporting IT failures, in some cases meaning there is no way of operating phones or computers.

At Lister Hospital in Stevenage, the telephone and computer system has been fully disabled in an attempt to fend off the attack.

NHS England says it is aware of the issue and is looking into it.

UK Prime Minister Theresa May confirms today’s massive cyber hit on NHS is part of wider international attack and there is no evidence patient data has been compromised.

Hospitals say backlog will go on for some weeks after today’s cyber attack #NHScyberattack pic.twitter.com/BGV5jV7KZ1

The situation has got significantly worse as The BBC reports the ransomware attack has gone global.

It is not yet clear whether the attacks are all connected. One cyber-security researcher tweeted that he had detected 36,000 instances of the ransomware, called WannaCry and variants of that name.

There have been reports of infections in the UK, US, China, Russia, Spain, Italy, Vietnam, Taiwan and others.

The BBB details a number of Spanish firms were among the apparent victims elsewhere in Europe.

Telecoms giant Telefonica said in a statement that it was aware of a “cybersecurity incident” but that clients and services had not been affected.

Power firm Iberdrola and utility provider Gas Natural were also reported to have suffered from the outbreak.

There were reports that staff at the firms were told to turn off their computers.

In Italy, one user shared images appearing to show a university computer lab with machines locked by the same program.

Bitcoin wallets seemingly associated with the ransomware were reported to have already started filling up with cash.

“This is a major cyber attack, impacting organisations across Europe at a scale I’ve never seen before,” said security architect Kevin Beaumont.

According to security firm Check Point, the version of the ransomware that appeared today is a new variant.

Several experts monitoring the situation have linked the attacks to vulnerabilities released by a group known as The Shadow Brokers, which recently claimed to have dumped hacking tools stolen from the NSA.

We Only Have 100 Years To Escape Earth – Anti Media News

UN: Afghan Civilian Casualties From US Strikes Up 50%