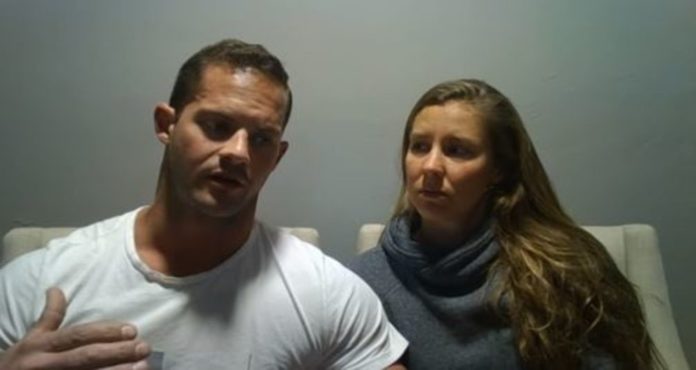 A California deputy facing up to five years in prison for selling drugs he stole from drug raids recorded a video apology in which he blames Satan for his own decisions.

“I made that decision based on Satan playing games with me, and making me feel like I was prideful and unable to go to family members for help,” Logan August said sitting next to his wife in the video apology.

According to court documents, while working for the Kern County Sheriff’s Office, August stole marijuana seized in ten raids in 2014, giving the pot to a confidential informant to sell, reported PINAC.

Deputy August gave the informant 25 pounds of marijuana, receiving a $15,000 cut of the sales.

Between June 2014 and October 2014, August colluded with a former deputy, Derrick Penny and his informant, as well as former Bakersfield police detective Patrick Mara, who was sentenced to five years in prison for stealing marijuana from a locked evidence storage facility and then selling the drugs.

According to public records obtained through Transparent California, August and Penny earned near $200,000 a year in pay and benefits during 2014. This makes the amount received from stealing and selling drugs seem quite inconsequential.

Both August and Penny, who both joined the department in 2007, admitted to their involvement in the scheme and are scheduled to plead guilty to charges of conspiracy to distribute and possession with intent to distribute today at the federal courthouse in Fresno, reported PINAC.

The maximum penalty for their crimes is five years behind bars in federal prison in addition to a $250,000 fine, although prosecutors are expected to recommend a lesser sentence as part of a plea deal.

“I want to first of all just express how sorry I am to the residents of Kern County and Bakersfield and especially to all the partners that I have with the Kern County Sheriff’s department and all the partners in the Bakersfield city Police Department,” August said during his apology video he posted to Youtube Sunday while sitting next to next to his wife.

“And anybody I ever worked with, anybody that wears the badge that I disgraced.”

Check out the apology below and let us know what you think about it in the comments!

Colorado Man Receives $41,000 Settlement After Police Detain Him For Recording

“I see being called fake news as the equivalent of the n-word for journalists”...

Told Her to Kill herself, Encouraged Students To Fight Her – Anti Media News