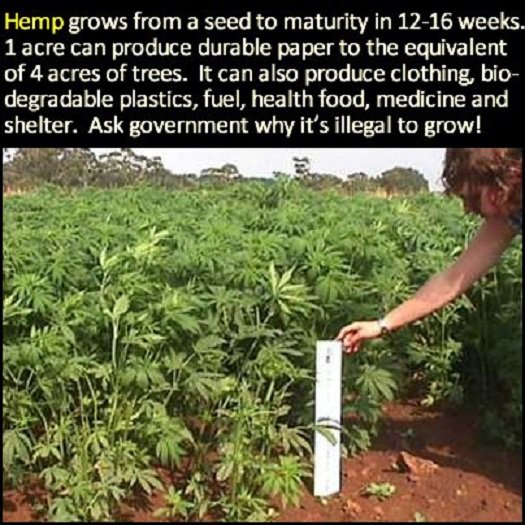 Hemp is the most universally useful plant we have at our disposal. The history of mankind’s use of hemp can be traced way back in time to between about 5000 – 7000 BC. Remains of seed husks have been found at Neolithic burial sites in central Europe, which indicate that they were used in funeral rites and shamanic ceremonies. It is probable that at that time the distinctions between various strains were not as pronounced as they are today.

Hemp is a variety of cannabis sativa that has a long history of use in the United States. However, since the 1950s it has been lumped into the same category of marijuana, and thus the extremely versatile crop was doomed in the United States. Hemp is technically from the same species of plant that psychoactive marijuana comes from. However, it is from a different variety, or subspecies that contains many important differences.

Industrial hemp also grows differently than THC-containing cannabis. Hemp is typically grown up, not out, because the focus is not on producing buds but on producing length of stalk. In this way, hemp is a very similar crop to bamboo. The stalk contains the fiber and hard, woody core material that can be used for a variety of purposes, even carpentry.

Hemp provides the fibre to make a durable paper – a far more sensible solution than the wasteful method of clear cutting old growth forests, or even the cultivation pine plantations that are ecologically speaking dead zones that take 20 years to mature before they can be harvested. Cannabis produces 4 times more fibre per acre and can be harvested several times per year. The first dollar bills were printed on hemp paper, your old family bible is probably printed on hemp paper and even the constitution itself was drafted on hemp paper.

Hemp has the strongest natural fibres, which can be used not just to produce rough cloth, such as sails or canvass, but also durable work clothes, like the original jeans. When the plants are grown closer together the fibre becomes shorter and finer, which allows for finer textiles. Today, there are some fashion designers that are experimenting with a wide range of textiles made from hemp for their stylish, trendy hemp lines, shirts, suits, bags, jeans and more. And, no- you can’t smoke them to get high!

Hemp fibres are also finding application as a modern building material, an application that has been spearheaded and exploited successfully in France. Hemp fibres can be blended with water and limestone to create an extremely tough, light-weight, natural cement that has not only excellent insulating properties, but also shows more flexibility than conventional concrete, which makes it particularly useful as a building material in earthquake prone areas.

Back in 1941, Henry Ford built a car that was not only entirely built from ‘hemp plastic’, but also ran on hemp fuel. Hemp oil, pressed from the seeds is also extremely versatile. It can be polymerized to create a solid plastic-like material, which is extremely durable, yet nevertheless is completely natural and biodegradable, which could replace plastics in numerous industrial processes.

Car manufacturers are again turning to hemp as a resource to provide light-weight, yet shock absorbent and environmentally friendly material for their cars. Due to the high biomass hemp would also make an ideal source of ethanol, the best bio-fuel alternative to gasoline, which is capable of fuelling engines without producing all those evil gases that are destroying our atmosphere and poisoning the air. At long last, some of the top car manufacturers are beginning to follow in Ford’s steps.

Some Facts on Hemp

– Farming 6% of the continental U.S. acreage with biomass crops would provide all of America’s energy needs.

– Hemp is Earth’s number-one biomass resource; it is capable of producing 10 tons per acre in four months.

– Biomass can be converted to methane, methanol, or gasoline at a cost comparable to petroleum, and hemp is much better for the environment. Pyrolysis (charcoalizing), or biochemical composting are two methods of turning hemp into fuel.

– The use of hemp fuel does not contribute to global warming.

Studies have been released that show people suffering from cancer have low levels of melatonin in their bodies. Also studies have shown that just smoking hemp can raise the melatonin levels in our bodies. So one can only imagine what hemp oil that is in a concentrated state can do to increase melatonin levels. Hemp oil promotes full body healing and raises melatonin levels thousands of times higher than normal. When the pineal gland produces vast amounts of melatonin, it causes no harm to the body but it is very hard on the condition you are suffering from and indeed can eliminate it. For almost a decade, Rick Simpson has been showing people how to cure cancer with hemp oil.

Every application that uses petroleum for it’s skin and hair products can use hemp oil as it is more beneficial and herbal. It can be used in many health issues as either a pain reducer or even as the cure for it.

– Since hemp oil is natural, it is used as a moisturizing oil which can be applied after a shower or a bath. When you massage your body with it, it nourishes the skin and increases the blood circulation. More on facial skin care.

– Hemp oil is used in cooking as well, though it is not suitable for high heat cooking. Along with giving a slightly nutty and crispy taste to food, it can be the perfect salad oil just in case you’re out of olive oil.

– Another application of hemp oil is it’s use as biodiesel in the same manner like other vegetable oils. It is a safe replacement for petroleum as it is non-toxic and doesn’t harm the environment.

– Almost all the forms of plastics can be made by using hemp oil instead of using petroleum as a base. As those made from petroleum, release harmful chemicals while decomposition, but those from hemp oil, don’t.

– Hemp oil can also be used in the production of paints as it doesn’t cause any armful releases when washed down from the drain and has very low emissions than the petroleum paints which are currently being used.

The list of beneficial uses of hemp goes on and on.

So why is non-psychoactive Hemp illegal?

Although technically hemp is not illegal to grow in some states, it requires obtaining a special permit from the drug enforcement agency (DEA) to restrict mass production. These permits are rarely given out and require that the crop be surrounded by security measures such as fences, razor wire, security guards, or dogs. For a crop that has little-to-no potential to get people high, the current attitude is both irresponsible and draconian.

Hemp is the most useful plant ally we have – a sustainable resource par excellence, as some might like to call it. Instead of cursing it we should be grateful to its deva and use all its ample gifts to turn the ecological demise of our planet around.

Industrial hemp could transform the economy of the world States in a positive and beneficial way, and therefore should be exploited to its full potential.