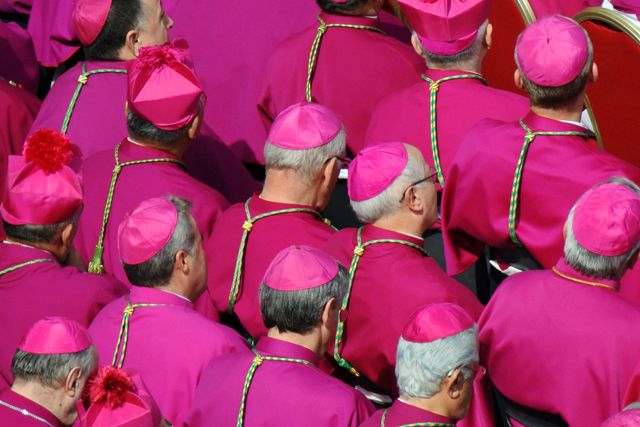 I wish this were a story in the Onion. But it’s not. The Catholic bishops’ attack on women is so outrageous, it’s hard to believe it’s not fiction. Here are five real things the bishops have said about women.

1. If it’s between a woman dying and a life-saving abortion, Catholic hospitals must choose the woman’s death

Yes, it’s true — the U.S. Conference of Catholic Bishops would prefer to let a woman die rather than allow Catholic hospitals to provide an emergency abortion. The bishops made their policy crystal-clear when a Catholic hospital in Phoenix defied the bishops’ rules and saved a woman’s life by providing an abortion. The bishops excommunicated a nun who was on the committee that approved the abortion, and the hospital was stripped of its Catholic status.

So, if you’re pregnant and need emergency care, think twice before going to a Catholic hospital. It could cost you your life.

2. If doctors at a Catholic hospital put a woman’s health or life at risk, their religious beliefs get them off the hook

Catholic hospital administrators argued they shouldn’t be held responsible after one of the hospitals under their control followed the bishops’ policies and refused to provide proper information and medical care to a woman in the middle of a miscarriage. Tamesha Means was 18 weeks pregnant when her water broke, and she rushed to the only hospital in the area for treatment.

Unfortunately, it was a Catholic hospital, and because of the bishops’ rules, the hospital didn’t tell Means that the pregnancy was doomed and that the safest course was an abortion. The hospital sent her home — not once, but twice — while she was in excruciating pain and developing an infection. Only once she began to deliver during her third visit did the hospital start providing care. Tamesha sued, and the hospital administrators argued that because of their religious beliefs, her case should be thrown out. The judge agreed, but neither Tamesha nor the ACLU is giving up. We have filed an appeal and will keep fighting to prevent other women from being denied appropriate medical treatment when they go to the hospital.

3. There is no such thing as a life-saving abortion

The families of the 650 women who die each year of pregnancy-related complications would beg to differ with the bishops on this one, as would major medical organizations. But, the bishops nevertheless used this argument against a proposal that would require federal contractors to provide their employees with health insurance coverage for life-saving abortions. The bishops said the universe of abortions necessary to save a woman’s life “comprises an empty set.”

That claim would come as a big surprise to Savita Halappanavar’s husband, who is still grieving the loss of his wife. Savita died after rushing to a hospital in Ireland when she was miscarrying at 17 weeks. The hospital refused to provide a life-saving abortion, noting that Ireland is a Catholic country.

Not content to just push for exemptions that would allow employers to block their employees’ insurance plans from covering birth control, the bishops continue to pressure the Obama administration to completely rescind the Affordable Care Act’s requirement that health insurance plans cover contraception. They actually argue that contraceptives are “associated with an increased risk of a number of adverse health outcomes” and that the rule is “at war” with the ACA’s purpose of ensuring coverage for preventive medicine.

That’s a ridiculous argument given the well-documented health risks associated with unintended pregnancy, including the fact that pregnancy can worsen a preexisting health condition. And some women take contraception primarily for health purposes, such as reducing bleeding from fibroids. As the leading women’s health organization, the American College of Obstetricians and Gynecologists, put it, “[C]ontraceptives are essential health care for women.” And last, but certainly not least…

5. Sorry you were raped, but we won’t help you.

The bishops get $10 million each year from the federal government to provide care to unaccompanied immigrant children who are fleeing abuse and torture in their home countries. Federal law requires the bishops to provide these young people with access to medical care, including emergency contraception and abortion. But the bishops refuse to do so, even if the teen has been raped while in their care. Religious freedom is a fundamental right, but that right doesn’t include using government money to impose your beliefs on others in our society and cause them harm, which is exactly what the bishops are doing.

For almost 100 years, the ACLU has worked to defend and preserve the individual rights and liberties guaranteed by the Constitution and laws of the United States.

“Whose Choice?” A Pro-Abortion Film