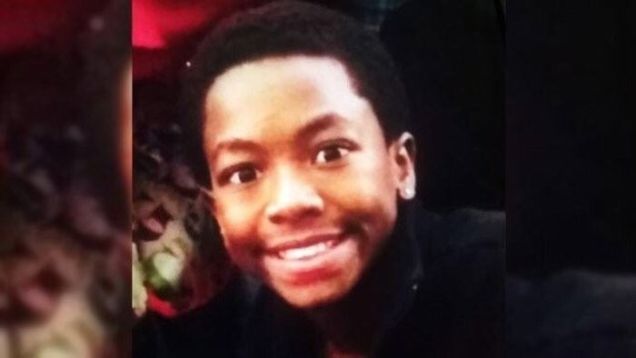 Mason, a nine-year veteran on the force, was responding to reports of an armed robbery—in the amount of $10—and a group of teenagers were the alleged suspects. Mason claimed that as he approached, Tyre pulled a BB gun from his waistband that looked like a real firearm, so he opened fire.

As previously reported by The Root, according to an autopsy performed by Dr. Francisco Diaz, an independent medical examiner retained by Tyre’s family, the 13-year-old boy was “more likely than not” running away at the time he was killed.

“Based on the location and the direction of the wound paths, it is more likely than not that Tyre King was in the process of running away from the shooter or shooters when he suffered all three gunshot wounds,” Diaz said.

Tyre’s friend Demetrius Braxton, 19, was with Tyre when he was killed.

Braxton confirmed that the 13-year-old boy was running away, not pulling out a BB gun, when he was fatally shot. Mason allegedly yelled for the boys to stop running and get down. Braxton stopped; Tyre did not.

Mason was placed on desk duty after the fatal shooting.

This is not Mason’s first time being trigger-happy. In December 2012 he shot and killed John Kaufman after Kaufman allegedly refused to drop his gun, the Columbia Dispatch reports. Mason was cleared in that incident. The Dispatch also reported that Mason was cleared of wrongdoing in separate shootings in 2010 and 2013.

Today’s grand jury decision is a sad and unfortunate reminder that a child has died in our community. While we are grateful for the grand jury’s service and for the community’s patience awaiting these results, the Council is also deeply reflective on how we must aggressively strive to end violence in our community and continue to improve the relationship between the people of Columbus and the criminal justice system. Increased openness and transparency is an important first step. That’s why, whenever possible, police investigations and grand jury proceedings must be available to the public. Anytime a child dies it is a tragic event, and this time is no different. The Columbus City Council members pray for all those who are involved and, as always, will work hard to do our parts to support and create initiatives that build trust with our police and reduces violence in Columbus.

Tyre’s family released a statement through their attorneys, which reads in part:

The family of Tyre King raised clear issues of bias and prejudice with the Columbus Division of Police and with the Franklin County Prosecutor’s Office. From the family’s perspective, the Prosecutor’s office relied on the Columbus Division of Police investigation exclusively and showed a deliberate failure to investigate Officer Bryan Mason’s actions with the same vigor that they attacked witness credibility.

Enough is enough. The lack of regard for a true investigation into the police-involved shooting of a 13-year-old child, who was according to multiple accounts and physical evidence running away, is numbing. The lack of consideration given to pursuing accountability is troubling, if not an outright violation of Tyre’s constitutional rights.

Although the grand jury did not indict Officer Mason, this does not mean that he did not commit a wrong against Tyre and against Tyre’s family.

As previously reported by The Root, news of Tyre’s death began circulating just as news about the 2016 police shootings of Terence Crutcher in Tulsa, Okla., and Keith Lamont Scott in Charlotte, N.C., were still developing.

Now Mason joins Crutcher’s and Scott’s killers—Police Officer Betty Shelby and Officer Brentley Vinson, respectively—in not being held accountable for the lives they have so violently taken.

Shelby was found not guilty of manslaughter Thursday and is already back on duty. Last November, the Mecklenburg County District Attorney’s Office declined to bring charges against Vinson.

Why Isn’t the Media Pointing Out That The San Bernardino Shooter Was An Outspoken...