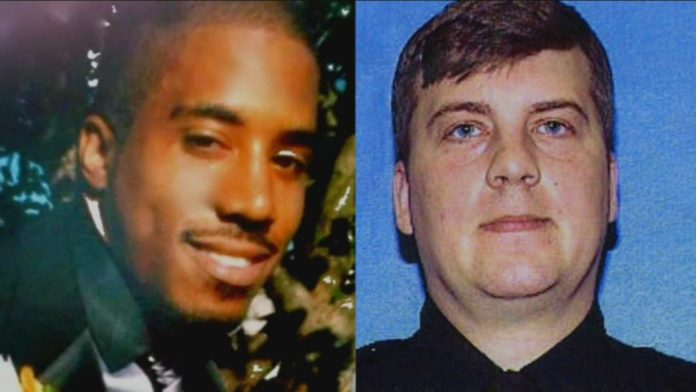 Dontre Hamilton, a 31-year-old man with an extensive history which included mental health issues such as paranoia and schizophrenia was sleeping in Red Arrow Park in Milwaukee, Wisconsin when a Starbucks barista called the authorities called to complain of his precense at the park. What happened next could not have been anticipated by anyone, and what Hamilton’s mother Maria claims is that her son was beaten then shot 14 times, something she relayed to “Democratic presidential candidate Hillary Clinton in November 2015- “Broad daylight. We had 60 witnesses.””

As reported by AlterNet:

The encounter between the two mothers is one of countless moments in “The Blood Is at the Doorstep,” a new documentary film that examines the trauma that continues to haunt Hamilton’s loved ones.

The documentary was filmed in the three years following Hamilton’s death. Maria now works with Mothers for Justice United, an organization she co-founded to raise awareness of cases like her son’s.

To commemorate his life, the family hosts an annual “Dontre Day” on April 30 in which activists march for unity and change.

The officer who killed Hamilton- Christopher Manney, did not face criminal charges in the shooting; but was terminated from the MPD for not following proper procedures during the incident. Hamilton’s family, had some semblance of justice when they received a $2.3 million settlement from the city.

Maria is not seeking to reprimand law enforcement as a whole, but wishing to highlight the shortcomings and the systemic racism that has been at the root of so many deaths of unarmed black men and women at the hands of police. Despite, this there are many opponents to her efforts.

Still, there is resistance among law enforcements’ strongest proponents.

“You see how people think,” Dontre’s brother Nate says in the film. “You have these people that say ‘I stand with the blue’ and ‘I back the blue’… They think that we’re just ‘out’ for police officers… No, we want the police to be better.”

This May, a proposed $2.3 million settlement with Hamilton’s family was unanimously approved by the city.

“The Blood Is at the Doorstep” screens during the Human Rights Watch Film Festival in New York City on June 09, 7pm, at IFC Center and June 10, 8:45pm, at Film Society of Lincoln Center’s Walter Reade Theater.

Both screenings will be followed by a discussion with filmmaker Erik Ljung, as well as Maria and Nate Hamilton.

The Blood is at the Doorstep (exclusive SXSW trailer) from Erik Ljung on Vimeo.

As more and more families are losing loved ones unjustly at the hands of law enforcement, the silence behind the injustice had to be shattered. Movements such as Black Lives Matter have been catalysts to shine a light on the true treatment of people of color by officers, and it will continue to do so until real, tangible changes have been made in order to keep citizens safe from rogue officers and the systemic racism that drives law enforcement as a whole.

Will you be looking forward to seeing the film? What do you anticipate its impact will be on those who watch it? Join the discussion the comment section below.

Florida Makes Off-Grid Living Illegal – Mandates All Homes Must Be Connected to Electricity...

New FCC Chairman Ajit Pai Is Out to Destroy the Internet as We Know...