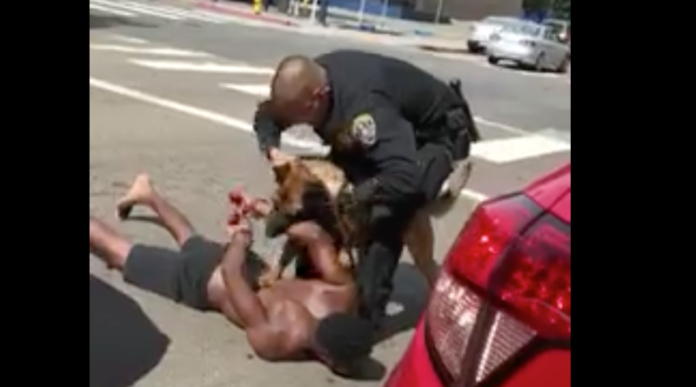 A video of a San Diego police officers protecting and serving the public by letting a police dog viciously attack a handcuffed black man is causing outrage after millions of people viewed it on Facebook. Officers seem quick to tase unarmed, non combative people, so why not tase the dog that was mauling the defenseless man? Officers are quick to shoot dogs, even when they are not a danger, so why not shoot the dog? This video shows us that police dogs are more important than black humans to these cops.

Police received reports of a man screaming, jumping on cars and acting out in downtown San Diego. When officers arrived on the scene, they found Karond Cheatum, who they claim threatened them, reported NBC San Diego.

Even though the police were armed with pepper spray, batons, Tasers, firearms, and training, the officers chose to let their dog maul the handcuffed man.

Angel Nuñez, who recorded the incident, can be heard on the video asking the cops several times about the savage attack. “You have no control over your dog,” Nuñez says, as Cheatum begs the cops to pull the K-9 off him. When three officers stand over Cheatum as he drips with blood, Nuñez again asks why three officers can’t get the dog off of Cheatum.

“Hey! Shut up and get back,” the officers reply as they drag Cheatum, with the dogs still chomping on his arm, across the concrete as he screams in pain.

Cheatum’s aunt told NBC that the victim has a history of mental illness, including post-traumatic stress disorder, and has been living on the streets. She says that Cheatum was charged with vandalism, theft and resisting arrest.

The police department seems to approve of this disgusting use of force and actually believe this was an appropriate way to de-escalate the situation.

Although the San Diego Police Department wouldn’t confirm that not allowing a dog to sink his teeth into your flesh is categorized as “resisting,” a spokesman for the department said, “While these videos can be graphic in nature to view, keep in mind, our canines are extremely effective at de-escalating situations and preventing elevated levels of force to take people into custody,” reported the San Diego Tribune.

The department did not define what “escalated levels of force” entails, but for Karond Cheatum, one can assume that he does not consider the level of force used in his arrest to be “minimal.”

Police dog maulings are unnecessary in most cases, and definitely unnecessary this time. These cops need to be held accountable for their brutal actions against this man!  If the dog can’t be controlled, then he should not be a cop.

The 5 Big Stories the Mainstream Media Should Be Talking About Instead of the...

Police Murder Father Of A Daughter That Was Hit By A Cop Speeding On...

Julian Assange Confirms Bernie Sanders Was “Threatened To Drop Out”