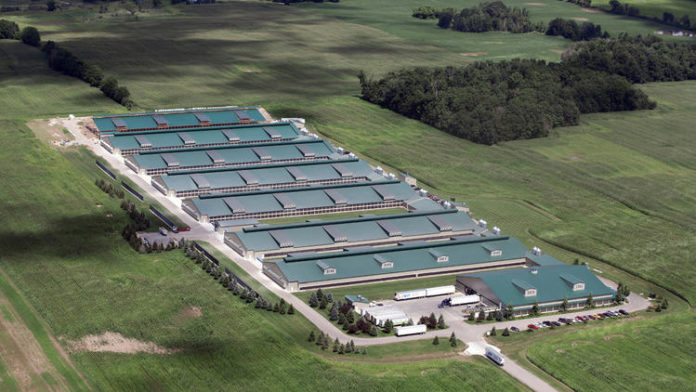 Even when people try to do the compassionate thing by buying “organic” eggs, they are being fooled by big companies and the USDA. If you are buying these, then you still contribute to terrible living conditions and cruelty for these animals.

Of all the cartons of organic eggs sold in the United States, more than 10% are from a complex here that houses more than 1.6 million hens, and are sold under the Eggland’s Best label, reported Eco News.

Details of the operation are hidden from the public, and he refused a Washington Post reporter’s request for a visit, citing the possibility that it could infect the flock with disease, such as avian flu.

But according to people familiar with the operation, as well as a building plan, each of the nine long rectangular barns at Herbruck’s holds about 180,000 birds, or more than three hens per square foot of floor space, according to sources, who spoke on the condition of anonymity because they had not been authorized to speak for the company.

In addition to being jam packed into these buildings, none of the birds is allowed to set foot outside.

Under USDA requirements, organic livestock are required to have access to the “outdoors,” get “direct sunlight” and “fresh air.” The rules prohibit “continuous total confinement of any animal indoors.” Organic livestock are supposed to be able to engage in their “natural behavior,” and for chickens, that means foraging on the ground for food, dust-bathing and even short flights.

“This is not at all what consumers expect of an organic farm,” she said, when told about Herbruck’s. “It’s damaging to the image of the entire industry. People will wonder, ‘Why the hell am I paying more for this?’ ”

“In addition, allowing the large egg operations to confine their hens to the barn creates an unfair advantage when hundreds of smaller family organic operations let the hens out and sustain higher costs,” said Paul.

The USDA allows Herbruck’s and other large operations to sell their eggs as organic because officials have interpreted the word “outdoors” in such a way that farms that confine their hens to barns but add “porches” are deemed eligible for the valuable “USDA Organic” label. The porches are typically walled-in areas with a roof, hard floors and screening on one side, noted Eco News.

This farm clearly violates the organic expectations of American consumers, and purchasing the Eggland’s Best brand shows support of this unethical behavior.

The USDA rules do not set an explicit minimum of space per bird, although the regulations do say henhouses should accommodate the “natural behavior” of the animals.

To make more space inside the Herbruck’s organic henhouses, which contain 56,000 square feet and stand about 20 feet in height, Herbruck has installed four levels of metal shelves. The shelves are known as “aviaries.”

Herbruck said it is misleading to say the hens are kept at three per square foot of floor space because the shelves add space for the birds. He declined to say how much space those shelves provide. He did not dispute the Post’s reporting on the number of hens and size of the barns.

If you choose to eat eggs and truly want organic eggs because you care about the living conditions and treatment of animals, then avoid these eggs. You are better off buying from a transparent facility that allows people to see exactly how the animals live.