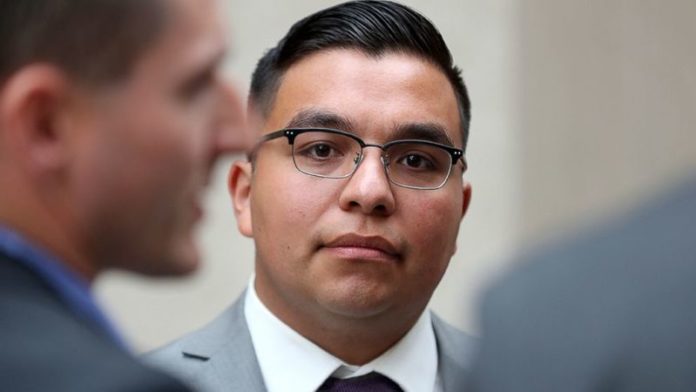 Just three weeks after he was acquitted of all charges connected to the shooting death of Philando Castile, St. Anthony Police Officer Jeronimo Yanez signed a separation agreement with the city Monday to leave the department in exchange for $48,500.

In order to serve the public interest and quickly assure the public that Officer Yanez will not continue as a St. Anthony police officer, the City has entered into a separation agreement that ends all employment rights of Officer Yanez at the City. Since Officer Yanez was not convicted of a crime, as a public employee, he would have appeal and grievance rights if terminated. A reasonable voluntary separation agreement brings to a close one part of this horrible tragedy. The City concluded this was the most thoughtful way to move forward and help the community-wide healing process proceed.

The Minnesota Star Tribune obtained a copy of the agreement from the city attorney’s office and reports that Yanez, who was making $72,612.80 per year when he shot and killed Castile on July 6, 2016, will receive a lump sum payment of $48,500 minus applicable deductions and tax withholdings. Additionally, he will receive payment for up to 600 accrued hours of personal leave. The agreement does not indicate how much personal leave Yanez has accrued.

The agreement also notes that Yanez’s official separation date as June 30, and indicates he was given ten days to consider the offer.

Yanez also has 15 days to rescind the agreement in writing.

On the day Yanez was acquitted, the city announced on its website that it had “concluded that the public will be best served if Officer Yanez is no longer a police officer in our city. The city intends to offer Officer Yanez a voluntary separation agreement to help him transition to another career other than being a St. Anthony officer. The terms of this agreement will be negotiated in the near future, so details are not available at this time. In the meantime, Officer Yanez will not return to active duty.”

Today Is The Anniversary of Largest Mass Execution of Native Americans In U.S. History...