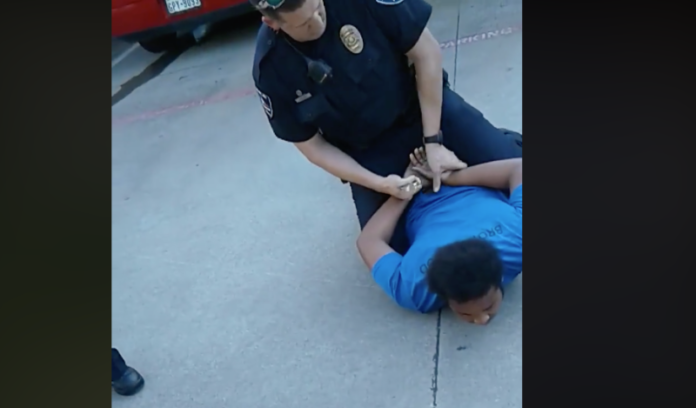 Activists in Arlington, Texas, have accused local officers of promising to drop charges against two teenagers in exchange for a video that their mother took of their arrests.

According to the Dallas Morning News, Next Generation Action Network, a Dallas-based organization that lobbies against police brutality, posted the video of the incident, which the organization said occurred July 3.

The post claims that the two teens were released eight hours later with charges pending.

It is unclear what happened before the cellphone footage starts, but the teens’ mother could be heard anxiously asking the officers where they were taking her younger son.

One of the officers said that he wouldn’t tell her because she was being “uncooperative.”

“I’m not uncooperative,” the woman argued. “All I just said to you is, ‘He is a good kid.’ And you said that he’s not going to cooperate. You’re going to ask him if he’s going to cooperate and if he’s a tough guy? He’s 14 years old.”

The officer then claimed that he was looking for a reason to release the boy, but her behavior was making it difficult for him to find one.

“You’re not finding it because you want somebody not to cooperate,” the mother said. “What do y’all got to do? Do y’all just constantly have to kill our kids for y’all to just sit here and think that their life is valuable?”

The concerned mother continued to demand to know where he son was being taken, even as the officer repeatedly refused to give her information.

Then something happened behind one of the officers, and that officer turned, grabbed the other teenager by his neck and pushed him to the ground.

“Don’t you grab my son like that!” the woman said.

“The mother was assured that the charges against her boys would be dropped. But only if she surrendered this video to the police,” Next Generation said in their post.

The organization is calling for the Arlington Police Department to drop any charges against the boys and return the mother’s cellphone immediately.

Trump Just Cut The Wages Of 4.2 Million Workers The Day After Labor Day

Video Emerges Of US Allowing ISIS Fighters To Escape Safely in Syria – Anti...

As Trump Takes Power, Politicians Around The US Move To Make Protesting Illegal –...