Home News White Supremacist Exposes Himself To His Homemade Poison…. Rushes To Hospital And... 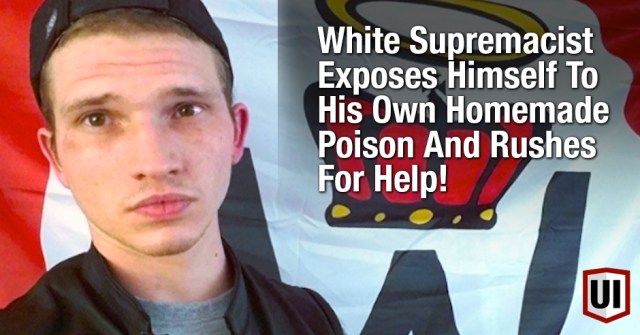 A Georgia white supremacist is in jail and under investigation by the FBI after running to hospital to desperately seek help for exposure to a biotoxin, the biotoxin Ricin, which he had made himself!

27-year-old Christopher Gibbs was arrested in early Feb. in Fannin Country after his hospital visit and his hands and car both testing positive for Ricin.

“I think it was all contained inside his vehicle, just a small amount of something I think he had been experimenting with. It was inside his vehicle and somehow he claimed he had exposed himself to what he made, got scared, and went to the hospital.”

Hazmat teams were immediately sent to make sure everything was safe and no-one else was exposed.

Gibbs apparently refers to himself as a’White Racial Loyalist’ and is affiliates with a group that calls themselves “Georgia Church of Creativity”, they are a white-separatist group that was founded in the early 1970s.

A Southern Poverty Law Center profile on the group say they describe themselves as a “Professional, Non-Violent, Progressive Pro-White Religion,” and they promote “what it sees as the inherent superiority and ‘creativity’ of the white race,”

Gibbs is in Fannin County Jail on probation violations and reckless-conduct charges. He faces five years jail time and a 2,000 fine.

I don’t know if the FBI are digging further but they also should be looking to see exactly what he planned to do with that poison. If he was Muslim you know a hate crime charge / terrorism charge would already be slapped on him too!

Medicine, Elections, Food, The Media…You Are Living In A Fabricated Fairy Tale – Anti...