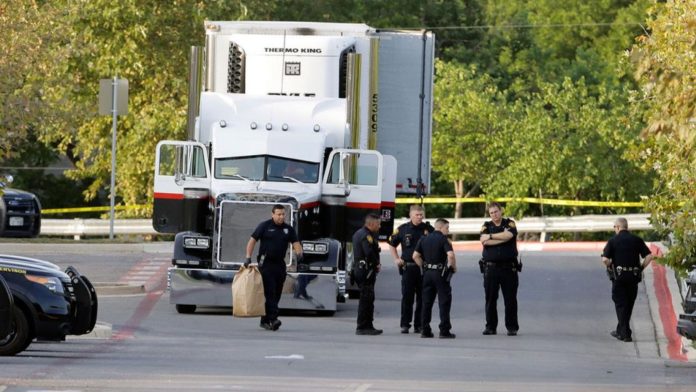 Emergency responders found eight people dead in the back of a semi-trailer at a Walmart in San Antonio, Texas, early Sunday morning, the victims of what appears to be an undocumented immigrant operation gone horribly wrong.

A man from the truck went into the Walmart to ask for water, and an employee from the store then called police to conduct a welfare check, reported CNN.

At about 12:30 a.m. firefighters responded and pronounced eight people dead on the scene, and another would die later at the hospital.

There were at least 39 people in the truck, which didn’t have a working air conditioning system despite temperatures that topped 100 degrees.

Of the 30 people transported to the hospital, 17 had life-threatening injuries.

City Fire Chief Charles Hood said some of the victims appeared to have suffered severe heatstroke, with heart rates soaring over 130 beats per minute. In the worst cases, Hood said, “a lot of them are going to have some irreversible brain damage.”

The driver of the truck has been arrested.

He said the people in the trailer would be reviewed by ICE agents to determine their immigration status and that there could be more arrests.

“The driver and whoever else we find is involved in this will be facing state and federal charges,” McManus said.

The chief also noted this type of thing is common.

“Fortunately, we came across this one and fortunately there are people who survived but this happens all the time,” he said. “You can see that it happens late at night under darkness because they don’t want to be discovered.”

Govt & Media Doing Exact Same Thing It Did To Start Iraq War, And...