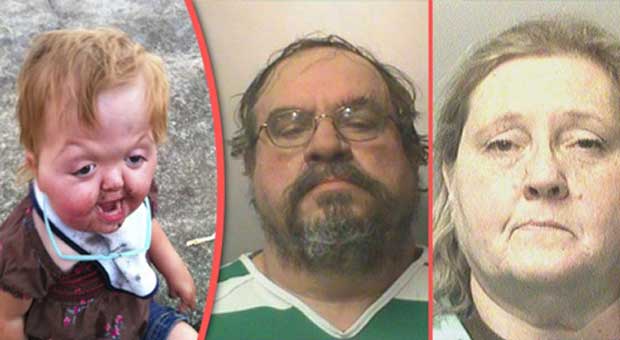 Police have been called to a house in Ankeny, Iowa, over 68 times thought the past 10 years following allegations of a pedophile couple abusing their disabled adopted children and allegedly running a Pedophile Ring.

Police were called multiple times a year for reports ranging from fighting, sexual abuse, attempted suicide and reports relating to children running away from home.“I actually feel happy. I feel relieved a little bit, but then at the same time, I feel like we haven’t had enough justice yet. They should have a lot more coming to them than what they have right now,” Krystal explained, according to WHO.

“I will hit you in the f***ing mouth,” John shouted, the Des Moines Register reported.

RT.com reports: The state Department of Human Services reportedly removed the two remaining children from the home earlier this month after receiving a call about child abuse. They have been placed in a shelter, reported the Register.

The police became aware of the videos in March 2016, the Register reported, and the police were called to the house 68 times since 2007.

According to the Register, the police were called multiple times a year for reports of fighting, assault, sexual abuse, attempted suicide, and others that said the children had been kicked out of the house or ran away from home.

After a girl in Alabama was raped by a family member, she asked for a waiver from a law that requires minors to receive parental consent before getting an abortion.

The reports also contain several references to guns being kept in the house, including one from 2015 that says Krystal called to report both her parents had ganged up on her. Police reported there was blood on the wall and guns in the house.

Another report from 2009 said that Makayla Bell, one of the children adopted by the Bells who was permanently removed from the home when she was 17, told police that she was “being abused by her parents and she will not go back home.”

After her adoptive parents were arrested, Makayla told KCCI that she lived in constant fear of being abused when she was living in the Bell house.

“Joyce had kicked me in the face several times, and I didn’t even realize how bad it was until about three or four days after when I looked in the mirror and couldn’t recognize myself,”

Makayla said. “It was bad enough to the point where I didn’t want to live anymore.”

Makayla was placed in a shelter after photos were taken of her injuries. Joyce was not charged in that incident.Makayla told the Register that her adoptive parents started physically abusing her about a year after she was adopted. She reported the abuse but said that her adoptive parents acted friendly and downplayed situations when police and social workers came to the house, and they did not investigate the claims further.

She added that all of the children had mental and physical disabilities ranging from bipolar disorder to mental retardation to cerebral palsy.

Krystal said that, at one point, all nine adopted children and one biological child were living in the three-bedroom house at the same time.

The Register reported that Iowa puts no limits on the number of children that foster parents are legally allowed to adopt, and pays foster parents up to $12,333 a year per child. With the Bell family adopting nine special needs children, they could make as much as $110,000 a year.

One of the Bell children, who has a mental illness, said that after being removed from the house, John kept the money she received from her Social Security disability checks.

Restaurant Made 1,000 Meals For Hurricane Victims, Hasn’t Been Covered By Media. Let’s Thank...

Supreme Court Says Victim Can’t Sue Cop That Shot Her 4 Times While In...