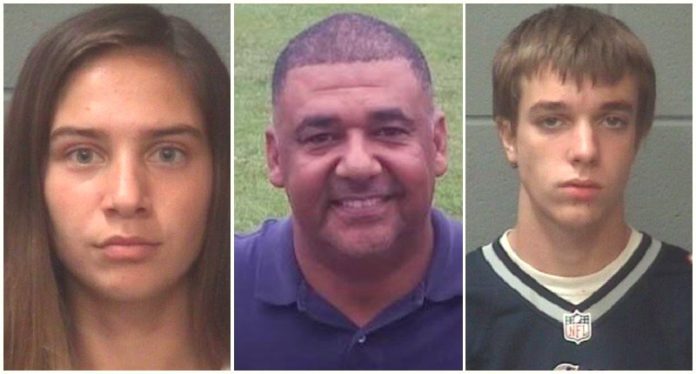 These teens say the Sheriff covered up her rape claims, so police believe they took matters into their own hands.

The North Carolina sheriff has warned of “consequences” against anyone accusing him of covering up violent rapes by the former deputy, who was shot to death last month.

William Clifton was found dead July 7 with multiple gunshot wounds and blunt force trauma injuries in a Jacksonville park, shortly after he resigned as an Onslow County sheriff’s deputy over an unspecified policy violations, reported Travis Gettys of Raw Story.

Sheriff Hans Miller declined to discuss why Clifton resigned, saying only that something had come to his attention that was outside his office’s values.

Raw Story reported on the details leading up to the rape allegations:

Ridgeway had been in a dating relationship with Clifton beginning in June 2015, when she was 16 years old and he was a school resource officer at her high school, according to a no-contact order for stalking and sexual misconduct her family member filed in February 2016.

Clifton resigned from the sheriff’s office at that time.

Their relationship was legal, since Ridgeway was over the state’s age of consent — but she claims Clifton tied her to a bed at least twice and sent her photos of a gun and some pills to suggest he would commit suicide if she told.

Clifton was also under investigation by the state in a case involving possible sex crimes against a 12-year-old during the same period.

If the sheriff did cover up allegations, that was likely the driving factor that lead to the deputy’s death. If the former deputy had been prosecuted for his alleged crimes, then there may have been justice, and he may still be alive.

The sheriff has also been accused on social media and by a local radio broadcaster of covering up the rape allegations against Clifton before he was killed by a gunshot to the chest — but Miller denies those claims.

“If an officer commits a serious crime he will be fired and we will call in an external agency to have it investigated,” Miller told The Daily News. “We don’t cover anything up here.”

He said the allegations against Clifton were sent to the State Bureau of Investigation, and the sheriff has lashed out on his personal Facebook page against his critics — occasionally several times a day.

“There will be consequences,” Miller warned Aug. 3.

Both teens remain jailed without bond in Clifton’s slaying.

Your Life Purpose Is To Please Your Husband – Anti Media News