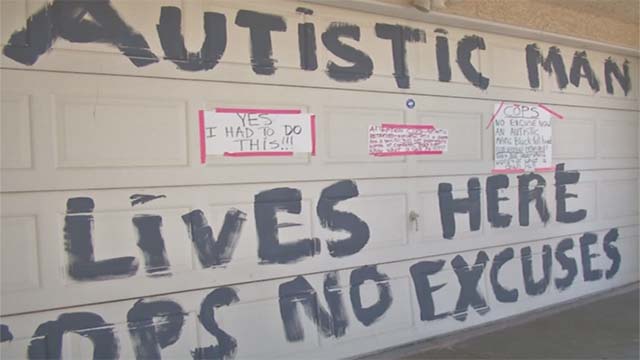 With the rise in police brutality and killings against unarmed people, a Nevada woman painted a message to police in huge letters on her garage door. “Autistic man lives here cops no excuses,” the door now says.

Judy McKim’s adopted son, Zachary, still has the mind of a toddler at age 28.  He is unable to understand words, wears a diaper and a pacifier and, according to his mother, almost got killed by police in a recent confrontation.

McKim’s neighbor called the cops on Zachary, telling them that he had flown into a rage.  When police arrived, they subdued him by kneeling on his chest, despite McKim’s warnings that he was autistic and didn’t know what a gun was, reported Fox 5 Vegas.

“There were three police officers on my son’s bed with their knees on his chest,” McKim said.

“Zach is non-verbal with an IQ of 17,” McKim said. “A woman who has never seen an autistic rage called in domestic violence on my son and police officers came in very gung-ho,” McKim said.

Though no charges were filed against Zachary, it was left out of the police report that they touched him, likely making the situation worse.  He was taken to the hospital for injuries and McKim has taken the situation into her own hands to avoid this kind of danger in the future.

The police report did state Zach was having “fits of rage” that lasted 20 minutes but that responding officers “never witnessed Zach hurt or hit anyone.”

In order to protect her son from future police instances, she painted a giant warning on her garage door.

“It scared me this bad,” she added.