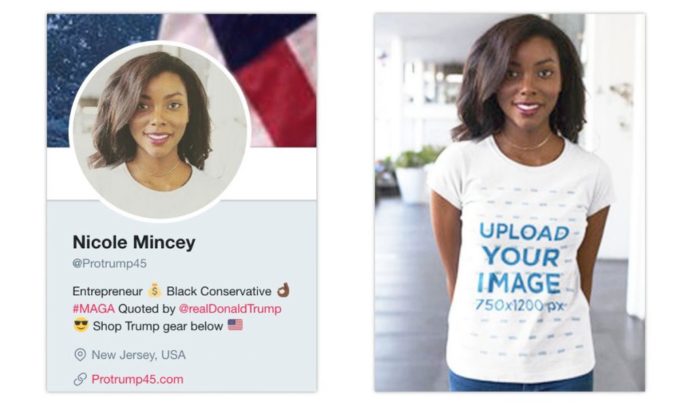 In a tweet on Saturday, President Donald Trump expressed thanks to Twitter user @Protrump45, an account that posted exclusively positive memes about the president. But the woman whose name was linked to the account said her identity was stolen and that she planned to file a police report. The victim asserted that her identity was used to sell pro-Trump merchandise, according to David Edwards of Raw Story.

After the account was stolen by Trump fans who used it for pro Trump propaganda, the name was changed to “Nicole Mincey”. The real name of the victim has been withheld to protect her privacy.

Mashable noted that the accounts were suspected of being so-called “bots” used to spread propaganda about Trump. Russia has been accused of using similar tactics with bots during the 2016 campaign.

It is unknown at this time if the accounts are actually from those who are pro Trump, or if they are like the Macedonia Teenagers who saw the gullibility of many Trump supporters as an easy way to make money.

By Sunday night, Twitter had suspended @Protrump45 and all of the Twitter accounts associated with the Protrump45.com website. Trump, seemingly unaware that he thanked a fake account for its support, had not removed his tweet thanking @Protrump45 by the time of publication.

Looks like the fake @protrump45 account @realDonaldTrump thanked has been suspended along with a bunch of other related fake accounts pic.twitter.com/4k26boKl2j

Something’s a bit odd about her bio shot. pic.twitter.com/AYJtiiUNCY

What’s really cool is when the bots complain about fake news. pic.twitter.com/e0fLJUe48U

Literally dozens of these memes on this bot account. pic.twitter.com/i4k31mrrZi

Never let it be said that Trump doesn’t have diverse fictional followers. pic.twitter.com/qbt7UdmOpK