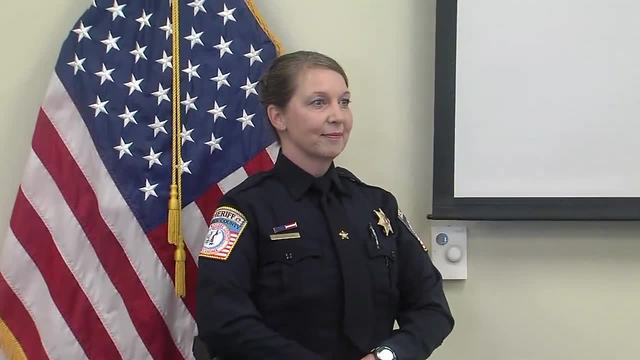 Tulsa, Oklahoma police officer Betty Shelby resigned from the police force after she flexed her blue privilege and was acquitted of manslaughter charges in the fatal shooting of an unarmed black man with his hands in the up in the air. Now, she is going to work for the sheriff’s office in a neighboring county.

Hopefully she will not encounter any more unarmed black men with their hands in the air at her new position.

Rogers County Sheriff Scott Walton told reporters in Tulsa that Betty Shelby will work for his office. He did not say what her duties will be, but he has scheduled a news conference for Thursday morning, reported NBC.

While her new job duties are not yet known, when she resigned from her job as a Tulsa officer she said, “Since being reinstated, I have found that sitting behind a desk, isolated from all my fellow officers and the citizens of Tulsa, is just not for me.”

Shelby, 43, was found not guilty in May of manslaughter in the September shooting death of Terence Crutcher, who was unarmed with his hands in the air when he was shot and killed by the scared officer.

The Atlantic reported Crutcher’s family filed a wrongful death lawsuit in federal court in June against Shelby and the city of Tulsa.

The lawsuit seeks at least $75,000 in damages and calls for widespread reform in the Tulsa police department, including mandatory training for officers on managing suspects with mental health or substance abuse issues.

Medical Examiner Says Death of Judge Sheila Abdus-Salaam Was a Suicide By Drowning –...