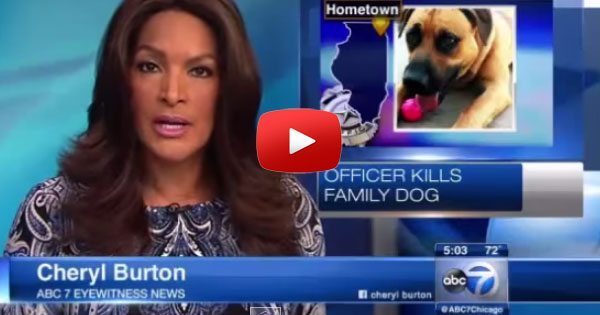 According to sources, a cop from Hometown, Illinois was fired for shooting and killing a family dog. The incident happened in July of 2014, just a few weeks before Michael Brown was shot and killed in Ferguson, MO, despite being unarmed.

ABC 7 reported Apollo, a 14 month old German sheperd-pit bull mix was shot and killed by the officer without any remorse what’s so ever.

On Friday, Apollo was shot and killed by a Hometown police officer in the front yard of the dog owner’s home, and she says her daughter Alexis saw it all.

“My quick reaction was to grab her and run inside because she fell to the floor and started screaming,” said Nicole Echlina, Apollo’s owner.

Echlin says Apollo had run out of the front door. Hometown police had been alerted, and encountered the dog as he returned to the front yard. Echlin says she tried coaxing Apollo back in the house, but he turned and bared his teeth at one of the officers. According to police, that’s when the officer withdrew his weapon and fired one shot, striking the dog.

Echlin says she questioned the use of deadly force- especially in front of her daughter- but she says the officer showed no remorse.

“He just said it had to be done. He walked up to me, told me that and walked away,” said Echlin.

The video report is below. The community was outraged an officer would use deadly force on the dog in front of the little girl, but many are wondering where is the compassion for laundry list of unarmed, black men being shot and killed by police around the country?

The real disappointment in the American legal system is Darren Wilson, the officer involved in the shooting of Michael Brown in Ferguson, MO, is still on administrative leave, in witness protection and sucking up tax payers dollars.

But the officer who shot and killed a dog has been removed from the police force. They are showing you the life of black men isn’t worth that of a dog.

CONGRESS UNLEASHES ATTACKS ON AMERICANS’ RIGHT TO HAVE THEIR DAY IN COURT – Anti...

In The 1950s The CIA Sprayed A French Town With LSD, Here’s What Happened...

W. BUSH SLAMS TRUMP: When Bush Says “I Don’t Like The Racism” You Know...