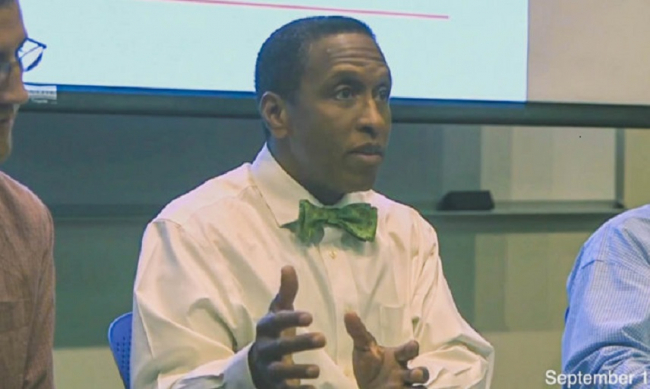 Civil rights leaders demand a professor be fired because he told a crowd of people that Black Lives Matter members “should be hung.”

Toby Jennings, a theology professor at Grand Canyon University, a private Christian school based in Phoenix, was speaking at a theology conference in September 2016 when he was asked about the Black Lives Matter movement, reported KPNX.

Jennings said there were those in the movement who want to have civil dialogue and were very thoughtful about it, but then his comments took a turn for the worse.

“And you have people on the opposite extreme of that that frankly should be hung,” he continued as an audience member behind the camera gasped loudly. In the background, more awkward titters could be heard.

Jennings, who is black, attempted to clarify his shocking comment.

“That kind of rhetoric is not helpful to any conversation, and that’s what I mean by they should be hung,” Jennings said.

The comments remained relatively unknown until recently, when it was brought to the attention of local activists and leaders who are now calling for Jennings to be fired.

“Before I saw the video, I thought it was a white man,” Pastor Warren Stewart Jr. said. “It’s self-hate, it’s a Willie Lynch syndrome, it’s a mindset of [devaluing] your own culture.”

GCU said that it met with local Black Lives Matter representatives privately and apologized for the comment.

Jennings has been suspended, but there has been no announcement about whether or not he will be fired. GCU insists that, despite this particular episode, there is no culture of racism or anti-blackness on campus.

“We asked; we said, ‘What examples do you have? Tell us what we don’t know, because we’re not seeing, experiencing that,’” GCU Honors College Dean Antoinette Farmer-Thompson said.