Home News This Image Is Going Viral On Pro-Trump Social Media, But There’s A... 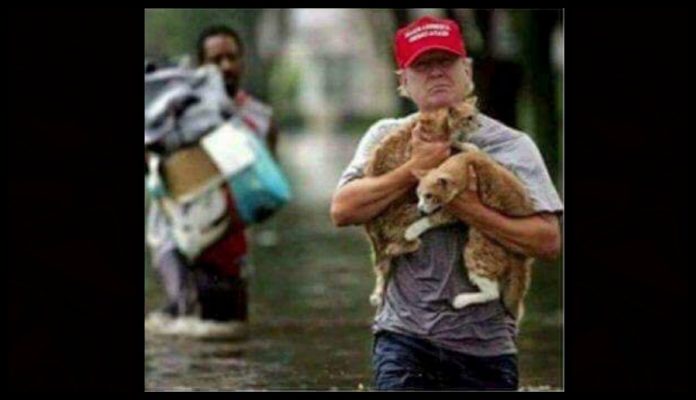 As both Texas and Florida recover from the pair of devastating hurricanes that caused widespread destruction, conservatives have been sharing a photo of Trump rescuing cats from the flooding that has – clearly – been doctored.

Not only is the image overly generous to a President whose diet consists of KFC and McDonalds and whose exercise regimen is limited to eating the aforementioned fast food, but it took Trump two tries to even confront a single hurricane victim.

When he finally did manage to arrive in Houston to “help” with the relief effort, the President’s visit was nothing more than a glorified photo-op.

While slowly loading one package into each truck in what is a blatantly staged and decidedly inefficient manner, Trump exclaims, “This is good exercise!”

If Trump wasn’t so concerned with making himself the center of attention, not only would the process have moved much quicker, but those in desperate need of aid would have received it in a timely manner. Instead, the hurricane victims had to wait on a 71-year-old man who has never lifted a finger in his life to transfer one container at a time into the bed of each truck so that the President could have his photo taken and make the hurricane about himself.

Republicans on social media can disseminate this fake image all they want, but at the end of the day, Trump is more likely to eat a salad than actually step foot in floodwater to rescue anything at all.

Ohio Officer Who Fatally Shot John Crawford III Will Not Be Charged – Anti...