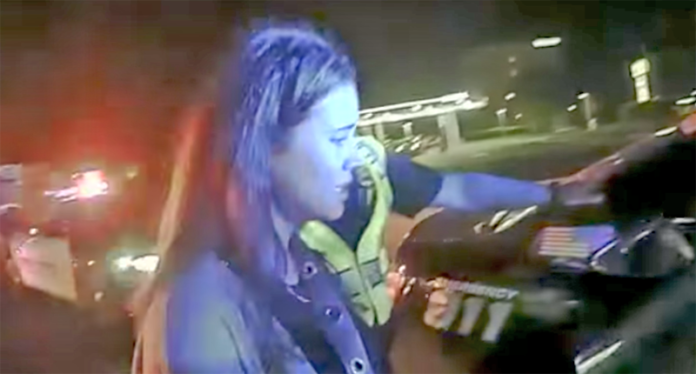 A New Jersey Republican lawmaker was caught on a police-body camera in a profanity-laced rant during a DWI arrest in April.

Raw Story reported The body-cam footage of Maria Rodriguez-Gregg, the first female Latina Republican in the New Jersey Assembly, was obtained by The Trentonian through a public records request and shows an interesting exchange between the combative politician and police.

Police responded after Rodriguez-Gregg was rear ended by another driver. Raw Story transcribed some of the video:

“It’s 3 in the morning and they’re probably drinking,” she suggested. “Make them do a breathalyzer.”

“I don’t need this kind of sh*t from these assh*les who can’t drive,” she tells the police.

Naturally, the had to tell the officers she was somebody important, suggesting she should get special treatment.

“I got rear-ended and you guys are treating me like I’m the f**king a**hole,” Rodriguez-Gregg told the cops.

She touts her importance as a person again, “I am a sitting assemblywoman. I am not an assh*le.”

Police then begin to search for illegal items.

“Please empty your pockets ma’am,” an officer says at about the 9 minute mark.

“I have no pockets, it’s a dress!” Assemblywoman Rodriquez-Gregg yells.

“You have a jacket on that has pockets,” an officer replies.

“You’re dealing with a sitting Assemblywoman, everybody is going to hear about this sh*t,” Rodriquez-Gregg predicted. “Harass a Latino female — exactly, no marijuana, nothing.”

“I have done nothing but support the police, I have have been one of your number one supporters politically. F*cking assh*oles!” she cursed. “Yeah, exactly, mess with the wrong person.”

The officers then decided to arrest her.

No marijuana was found in her system and the other driver was never given a sobriety test.

Watch the body-cam video below:

Good Cop Exposes ‘1 Ticket Per Hour’ Quota Scam After Being Fired For Refusing...