Home News This Military Veteran Was Found NOT GUILTY After Threatening Cops With a... 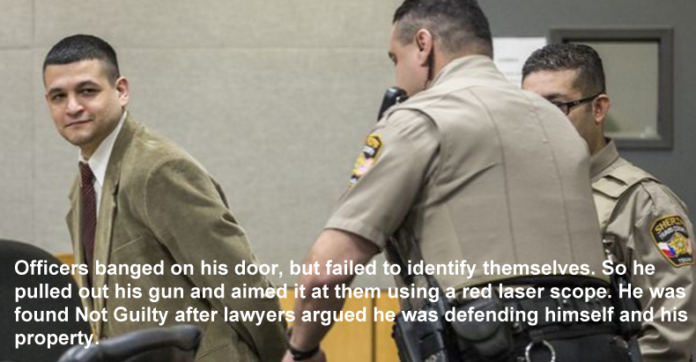 A friend had been concerned about Gene Phillip Vela’s health.

The ex-marine suffers from post-traumatic stress disorder from his days in combat.

He had just spoken to his pal Andrew Clark sounding upset, just before they hung up he told him he needed help.

Clark, concerned about his friend’s well-being, ended up calling 911 in forming the dispatcher about Vela’s distressed state.

Moments later police and emergency services were on their way to his apartment in central Austin. In the meanwhile, the call taker contacted Vela.

The already disturbed man was confused by the phone call and then further alarmed by the ruckus outside his apartment.

Someone was incessantly banging on his door.

So, he took his pistol and went into his living room to check out what was going on.

None of the police officers present identified themselves as members of law enforcement when Vela opened the front door while holding his gun.

It was not until a negotiator arrived on the scene that he learnt he was dealing with cops.

Forty-five minutes after that call from Clark, the man with mental health issues was shot thrice – with one bullet entering his shoulder.

Then he was placed under arrest charged with aggravated assault on a public servant.
This was two years ago.

Now Vela, whose post-traumatic disorder symptoms have worsened, is suing the city of Austin and the Austin police Department claiming negligence, excessive force and unreasonable search and seizure.

So what was he doing between the November 2013 incident and now? He was in jail serving time for his charges that were dropped earlier this year.

Essentially, this means his injuries that night, the stand-off and jail time should have never happened in the first place.

The gun shots fired by the police left metal shrapnel in his body and wants to his chest, left arm and hand.

Speaking on November 11, which is Veteran’s Day, he said 22 veterans commit suicide on a daily basis in the United States.

Some people, who have served in combat, are emotionally disturbed and authorities need to find a better way of dealing with them.

“We as a city need to take better care of them, we need to take more steps to make sure what happened to me or what happens to the veteran who commits suicide doesn’t happen in our city.”

His attorney Skip Davis says it is time the authorities took responsibility for their failure.

“We filed the lawsuit to bring accountability,” he added.

“[We want] To force Chief Acevedo to respond to the allegations that his officers clearly assaulted Gene and didn’t follow his own policies that he signs every year ranging from failure to notify Gene adequately of their presence to deploying the mental health officers trained at deescalation.”

Vela says the incident has changed him.

“There are a lot of differences two years ago between me then and me now. Being locked up in a maximum security cell for 15, almost 16 months really changes a person.”

‘Get out!’: Lt General Unloads on Air Force Academy After Racist Messages Found On...

These New Cannabis Capsules Are So Powerful They Could Replace ALL Pain Killers –...