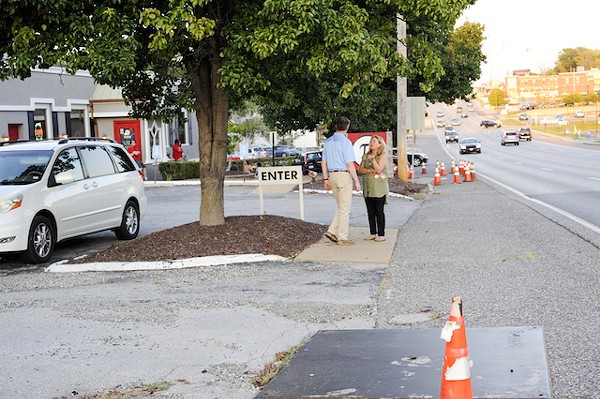 About 5 pro-police protesters (and a dog who was neutral) showed up at Pi Pizzeria’s Kirkwood location Friday night in a failed attempt at intimidation of owner Chris Sommers over his recent criticism of St. Louis police department’s brutal tactics.

However, the business was packed and has been very busy since Blue Lives Matter started their harassment campaign.

The action was planned by a Facebook group called Boycott Pi Pizza St Louis, which criticized Sommers for his criticism of police aggression after they shot pepper balls at him and threw tear gas at him while he was walking from his business to his car during the protests over the not guilty verdict of an officer that murdered an unarmed black man.

Riverfront Times reported the pro-police group Blue Lives Matter published a blog post about Sommers after he tweeted that the police officers who were chanting “Whose streets? Our streets” were “dimwits.”

“Let’s get the word out that if you bash the police, you won’t be getting our business,” the article read.

That post, including by the union representing St. Louis County police officers, led to all four Pi Pizzeria locations being inundated with nasty phone calls, fake orders, and phony one-star reviews, Sommers says. Online commenters and pro-police activists called for a boycott, and planned a protest at the only Pi restaurant not actually located within St. Louis city limits.

“Please let Chris Sommers, the very arrogant owner of Pi Squared Restaurant, know that you SUPPORT our law enforcment by going to his restaurant Friday night with PRO Police signs and let his customers know where he stands on law enforcement,” the event’s description reads. Pro-police protesters were urged to dress in blue clothing.

While they talked tough online, very few actually showed up to protest.

Riverfront Times was able to speak to each member of the massive crowd and reported their findings:

Things kicked off at 6 p.m. on Friday with two men and and one woman standing on the edge of the parking lot near a chair with a blue balloon tied to it. At its height, the crowd swelled to four people, ranging in age from 45 or so to approximately 60, and one dog. None of them wanted to share their full names.

John came here out of curiosity, he says. He lives about a block away and says he’s had previous “uncomfortable” interactions with Sommers over a neighborhood zoning issue involving a proposed parking lot.

“I’m also supporting the boycott because of what he had to say the other night on camera,” John says, referring to Sommers criticizing the police. Asked how he felt about the outcome of the Stockley trial, he says, “The whole matter is tragic,” but makes clear he is pro-police.

Patrick came from Fenton. He says he is out here to support his father and brother-in-law, retired and current police officers, respectively. He makes clear that he is in favor of protesting and free speech, so long as everything remains peaceful. Referring to Sommers, Patrick says, “He can say whatever he wants to say. That is his right to do so, just like it is our right to stand here” and not support his business.

Laura is from St. Charles. She says her reason for being here goes back years, to a time that she attended a daytime protest in response to the killing of Michael Brown. She says she saw protesters throwing rocks and bottles of urine and yelling in officers’ faces.

“I was really disillusioned, to the point that I cried,” she says. “It’s affected me profoundly; I’ve never been the same since what I saw.” She is very upset with what she sees as dishonesty from the media.

Debbie says she’s neutral. “I stand in favor of both,” she says. “I see both points of view.” She doesn’t like that people get in police officers’ faces and scream at them, but she does like a book called Just Mercy by a man named Bryan Stevenson, and she says she would support Stevenson if he ran for president.

A fifth guy shows up close to 7 p.m., but the other protesters had already left a half-hour prior when Fox 2’s Elliot Davis approached them with a camera. This man carries a sign that says “We support our police,” and walks right past Sommers in the parking lot, seemingly not recognizing him. He leaves within ten minutes — and with that, the pro-police protest, which was scheduled to run until 9 p.m., is over.

Sommers expected the internet tough guys not to show.

“I thought that they would — I would hope that they would have better things to do tonight,” he says. “I guess it’s just easy for these guys to run their mouths on social media — what they criticize me for doing — but when it comes time to really show up they don’t. Unlike the [Stockley verdict] protesters, who really do show up.

“And that’s pretty telling too,” he adds. “They can’t handle my words but they come back with all these threats and harassment, but when it really comes time to put your money where your mouth is, they’re not doing it.

Employees said the restaurant was uncharacteristically packed, with about an hour wait time for a table.

Texas Lawmaker Introduces Bill To Put Women In Prison For Having An Abortion –...

Terrorist Screams ‘Arab, you need to leave!’ Before Attacking his Victim With a Crowbar...