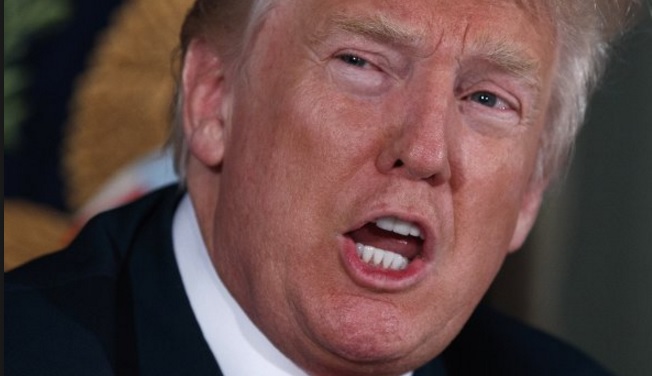 The humanitarian crisis in Puerto Rico continues to grow in the wake of a devastating hurricane that has left the American territory without food, medical resources, enough housing and with the power out across the island.

Trump has been criticized for being more concerned about football players lack of patriotism than he is about the devastation impacting the lives of thousands in Puerto Rico.

Of course, Trump claims the government, mostly through FEMA, is doing everything it can, but those on the ground – including the governor of Puerto Rico, Ricardo A. Rosselló – disagree.

Today was even more discouraging after the Trump administration officials said they would get around to asking Congress for more money to help Puerto Rico somewhere around the middle of next month, insisting they have resources needed to help now.

However, the reality is that after hurricanes in Texas and Florida, FEMA is already stretched thin, in terms of resources and money to help victims. The resources that are arriving are being hindered because of damage to the ports and airports where it has to be received, so the problems and delays are mounting.

Is Trump really doing all he can?

Some see a different game being played with human lives as pawns of those who want to use the tragedy to do a huge business deal, the takeover of the publicly owned power company serving the entire island.

For several years, there has been an effort to force Puerto Rico to privatize its public utility, the Puerto Rico Electric Power Authority (PREPA), whose executive leaders had warned in advance of the storm that they could face a difficult situation.

That is because the average age of the power plants there is about 44 years, far older than most American plants; and the utility is suffering under a debt of over $8 billion at a time there is an outflow of population (taxpayers) due to economic problems that existed even before the storm hit.

Normally, a privatization of PREPA or any part of it would be a slow cumbersome process requiring multiple government and agency approvals at many levels.

However, there is a law called Act 76 passed in 2000 by Puerto Rico’s legislature which, according to The Intercept, “allows governmental bodies to bypass certain permitting processes during a state of emergency.”

“It also allows the governor to ‘amend, revoke regulations and orders, and rescind or resolve agreements, contract, or any part of them’ so long as the state of emergency is in effect.”

In other words, the longer Trump stalls, and people suffer, the better it is for the private companies that have been longing to take over power generation in PR for years.

Rosselló actually invoked Act 76 this past January, declaring the power infrastructure there so bad it was a “state of emergency.”

Complicating things is the on-going financial crisis. Puerto Rico’s financial problems got so bad by last year, an oversight board was created by an act of the U.S. Congress that essentially is over the local island authorities.

“Politically speaking, this crisis is the direct result of Puerto Rico’s colonial status,” wrote The Week this past March. “It has no representation in Congress, no electoral votes, and does not enjoy the legal protections of statehood. As a result, Congress has yanked it around based on the whims of the mainland, often forgetting all about it for decades.”

As a result, the decision on privatization may be made without direct approval from the governor or anyone else in authority on the island.

“There are interests who were already knocking on Congress’s door to take on the issue of PREPA.” reports The Intercept. “When you have a body like the board, that is only accountable to Congress, companies, and individuals that want to invest in Puerto Rico aren’t going to lobby the government of Puerto Rico,” Deepak Lamba-Nieves, research director for a Puerto Rican think tank. “They’re going to lobby Congress.”

One of those behind the effort to privatize is Bill Cooper, who was recruited by Rep. Rob Bishop (R-Utah), who heads the Congressional committee with oversight of Puerto Rico. Cooper was the head of a trade association for natural gas.

Cooper is pushing for Puerto Rico to create a new special port that can handle natural gas, which he says would replace the current oil-fired plants.

This is much more complicated, of course, with other economic and business considerations.

However, what is getting lost is the humanitarian tragedy on the island, which did not end with the storm. In fact, that only began a new phase, leaving people there without shelter, energy, communications or food.

There is no absolute proof Trump and his administration are dragging their feet or conspiring to privatize the island’s industry, but there are reasons to be concerned at the least and suspicious of their motives in the worst case scenarios.

Some are already calling Puerto Rico’s situation “Trump’s Katrina,” a reference to the angry, unhappy reactions to the aftermath of the devastating hurricane that hit New Orleans, and left years of despair and rebuilding in its wake.

For once, Trump needs to step up and help these people to prove he isn’t just a tool of big money interests.

Or he can keep going the way he is going and Trump will prove once again he is a tool of big money interests, and everyone else can be damned.

“How will history remember Donald Trump’s response to the serial disasters that flattened U.S. territories and hemispheric friend in the Caribbean?” muses The Daily Beast. “How will it record a president who with his party dismisses climate change as a hoax, whose sympathies come by tweet, and who spends the days of devastation for American territories largely populated by black and brown citizens, preening in Alabama?”

Based on history, the answer is we all need to be deeply concerned for the American citizens in Puerto Rico, which is the entire population of the island, and for all the others affected by the storms.

The history of privatization in America is not that it leads to lower costs and better service, but rather to higher costs and uneven service, while those who get the public assets on the cheap inevitably become much richer in the process.