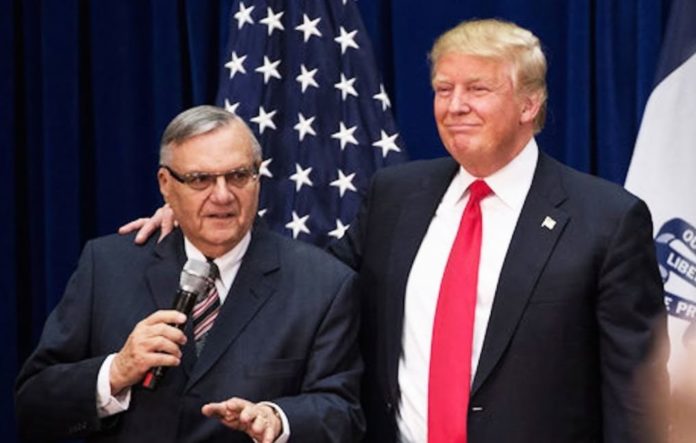 Former Maricopa County, Arizona Sheriff Joe Arpaio will officially have criminal violations of a the law disappear after a federal judge accepted his presidential pardon Wednesday.

At the request of Arpaio’s defense lawyers as well as lawyers form the U.S. Department of Justice, U.S. District Judge Susan Bolton dismissed Arpaio’s guilty verdict with prejudice, meaning that the case can never be tried again reported The Arizona Republic.

Arpaio is a famous racist sheriff that used racial profiling to target minorities during his time as Sheriff. The things he did are so wicked, that people watching a documentary on him actually thought it was a joke.

On July 31, Arpaio was found guilty of criminal contempt for “flagrant disregard” of another federal judge’s order to stop profiling Latinos in his signature, nightmarish immigration patrols. District Judge G. Murray Snow forbade Arpaio’s deputies from detaining people based on their immigration status back in December 2011. However, the practice went on for some 17 months, during which Arpaio’s office is said to have illegally detained at least 171 people, the Republic notes.

He was only sentenced to a maximum of 1 year in jail, but Trump decided to pardon his racist friend, so he did not spend any time incarcerated for his illegal and unconstitutional activities, proving once again that President Trump puts his racist friends above the law and above the constitution.

Alt-right Executive Wants a World Where Hitler Is on Currency and Concentration Camps Make...

Anonymous Tells Trump “You Are Going To Regret The Next 4 Years” – Anti...