Home Crime Watch: Utah Police Fatally Shoot Man In The Back As He Ran... 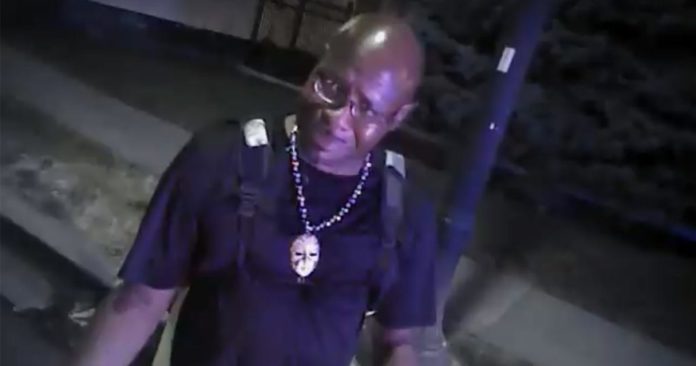 Salt Lake City, Utah police wear caught on body camera footage fatally shooting a black man as he “was trying to get away,” after he was stopped by police for riding a bike without a light. After shooting him, the officers proceeded to cuff him while he was on the ground dying.

The officers that shot him in the back as he ran away have been cleared over the death, with Salt Lake City prosecutors saying they were justified in the killing because Patrick Harmon had a knife and they feared for their lives, reported The Guardian.

Newly released body camera video has sparked accusations of a “flat-out murder” after the 50-year-old was pulled over for riding a bicycle without a light on 13 August.

The body-camera footage, which was handed to local media, shows officer Clinton Fox shouting “I’ll f***ing shoot you” before firing three shots into Mr Harmon, who appeared to be running in the opposite direction.

Another officer said he fired his Taser at Mr Harmon, who slumped to the ground and was handcuffed while groaning in pain.

Salt Lake City officials say Mr Harmon ran because officers were preparing to arrest him after it emerged he had an outstanding warrants, including one for aggravated assault.

As he ran, it is alleged he said “I’ll cut you” before turning to face the officers holding a knife, at which point he was shot by Mr Fox. Investigators allegedly later found a knife at the scene.

However, the video does not pick up Mr Harmon making the alleged threat.

The officers were so terrified by the sight of a man running away that they were unable to think straight.

Officer Fox told investigators he felt “terrified by how close Mr Harmon was to the officers” and it was the “scariest situation he had ever been in”.

Although being given first aid at the scene by police, who could be heard on body-cam footage saying “Patrick, stay with us”, Mr Harmon was pronounced dead at hospital soon after.

“They just murdered him flat out,” Alisha Shaw, Mr Harmon’s niece, said. “They are lying. There is no way they were threatened by anything. He was only trying to get away.”

In 2016 a supreme court in Massachusetts ruled black men running from police have a legitimate reason to do so, citing a report which found they were disproportionately likely to be stopped by officers in Boston.

A study also found unarmed black people in the US were more than twice as likely as unarmed white people to be shot dead by police.