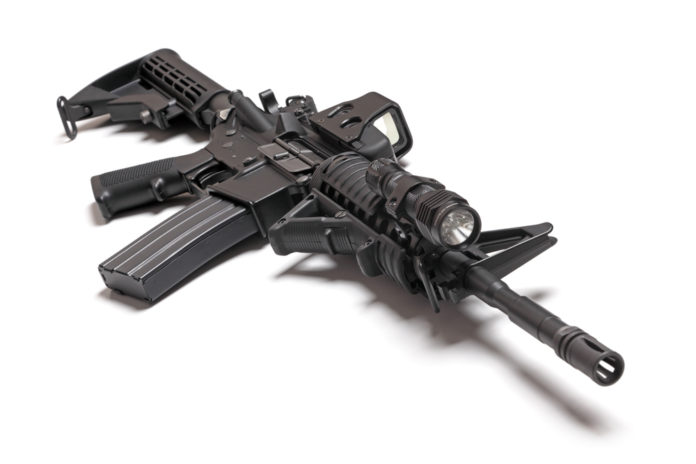 Last week’s mass shooting in Las Vegas took the lives of 59 people and injured countless others. While the nation comes to grips with the unimaginable loss, the debate over gun control is reignited and supporters on both sides of the table have their ideas on how exactly the country’s gun control laws played a part in this tragedy.

No matter what your opinion on gun control, what one Church decided to do to raise funds for a drug rehab program is undoubtedly tacky.

The Oasis Church of Nations in Oxford, Mississippi, decided to raffle off two AR-15 rifles to fundraise for the program, but ownership of automatic weapons is a tender topic as of late, especially so soon after the Las Vegas shooting since the AR-15 was the weapon of choice by the shooter, Stephen Paddock. Could the church have not chosen something else to raffle off? Or given the deadly problem that is drug addiction, is it wise to try to solve it by giving away a deadly weapon?

Tickets for the raffle were being sold at a table inside a local Walmart, which is where it caught the attention of a man who later spoke with the Washington Post.

“I see this one little girl in particular, you know, pointing to the thing about the AR-15 raffle and getting people to buy tickets,” [Matt] Sessums told The Washington Post. “It just kind of blew my mind that little kids were participating in something like that.”

The church’s Facebook page — which appears to have been taken down in the wake of this controversy — said that money from the raffle would go toward helping people deal with drug addictions. But it’s absurd to solve one deadly problem by introducing something else potentially lethal into the mix.

One would question the timing of the raffle, but apparently, a church worker said it was simply a coincidence.

A man working with the church later said, “For some, there would never be a right time to raffle any fire arm,” but that ignores the fact that this appears to be a direct response to last week’s incident and not some pre-planned raffle. It’s at best completely insensitive to a national tragedy.

This is hardly the first time a rifle has been raffled (or won) by religious figures. A church in Kentucky did it in 2014. A New York pastor followed suit a week later and quoted John 14:27: “My peace I give unto you.” And just last year, a reverend used church funds to buy a large number of tickets to win a gun raffle for a girls’ softball team. He won the prize, dismantled the gun, then “repurposed” its parts into gardening tools.

Since the church’s Facebook page is down, it’s unclear if the raffle is still proceeding. But just imagine for a moment what the reaction would be if a mosque did the same thing.

Maybe that’s what it would take for Christians to realize just how idiotic of an idea this is.

What are your thoughts on the matter? Do you think the raffle is insensitive in light of the Las Vegas mass shooting or was it merely a coincidence, and they are simply a church trying to do some good? Let us know your thoughts in the comment section below.

These Vagina Necklaces Are So Popular They Broke Their Creator’s Etsy Shop – Anti...