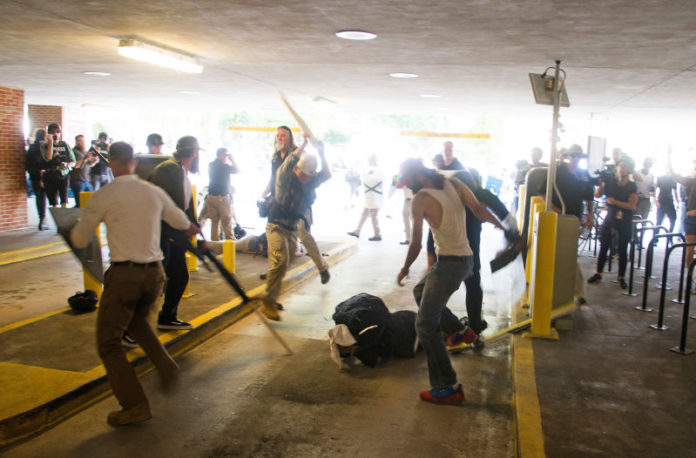 Rather than collect information and prosecute the ones caught on video brutally beating a man because he was black, authorities have decided to go after the victim of the vicious attack.

Deandre Harris, 20, was viciously attacked by white supremacists at the Charlottesville, Virginia white supremacist rally about 2 months ago is now a wanted man after a local magistrate issued a warrant for his arrest in connection to the same Aug. 12 incident that left him bloody and wounded, reported The Root.

Harris is now wanted on charges of unlawful wounding in connection to that same day, and is accused of attacking a man in the group that brutally beat him, according to WCPO.

Harris’ attorney, Lee Merritt, found the new development to be ridiculous and describes it as “clearly retaliatory” on the part of white supremacists since Harris turned to social media to identify those who beat him.

Merritt said Harris would turn himself over to police.

Showing that police are not too concerned with talking to witnesses, Roberts tweeted that police still have not interviewed him about the beating to this day, even though he is a witness.

This is fucking unbelievable. I STILL have not been interviewed by #CVille PD or the @FBI about his attack. They have NO interested in it. pic.twitter.com/oZBr7NFEV3

Harris’ head injuries were so severe that he required eight staples. He also suffered a broken wrist and a chipped tooth.

Since Harris’ beating, two of the suspects in his beating, Daniel Borden and Alex Michael Ramos have been arrested. Ramos was arrested shortly after his famous video describing how he cannot be racist because he is Puerto Rican went viral.

Police have not released information related to why Harris is wanted, but the Charlottesville police promised that there would be an explanation following the arrest.

WCPO points out that white supremacists celebrated the warrant on Twitter on Monday, with one white nationalist appearing to claim that it was a group effort to collect evidence on Harris.

Thousands Of US Troops Leave For Kuwait To Fight In Syria And Iraq –...