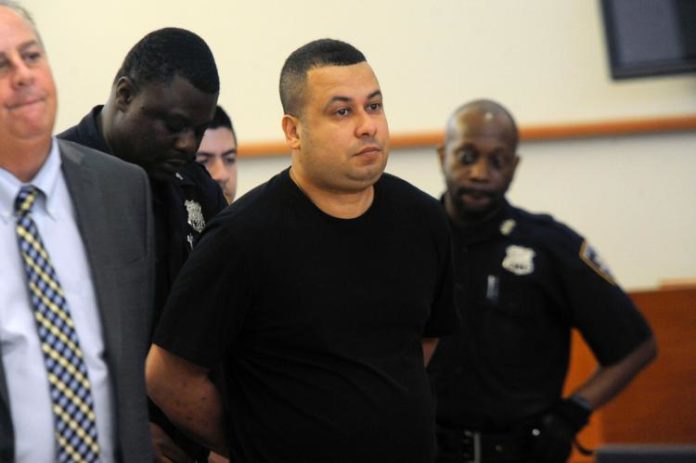 A New York City cop is facing charges after being arrested for having sex with an underage girl and recording their sexual exploits.

The officer, Raul Olmeda, 40, was arraigned on a 67-count indictment and is currently being held on $250,000 bail, reported the New York Daily News.

“The nature and scope of the charges in this indictment are egregious,” O’Neill said. “The fact that the defendant is an NYPD officer evidences an unconscionable violation of his oath to uphold the law and protect the public.”

According to the report, Olmeda paid the girl for sex 5 times between January and April, including twice after police searched his apartment in the Bronx. Bronx District Attorney Darcel Clark said that the older man “preyed on the vulnerable young woman and videotaped his demeaning and dehumanizing act.”

“It is especially disturbing that these crimes are alleged against a member of the NYPD,” Clark added.

The victim is younger than 16, and officers say that they uncovered the crimes while conducting a prostitution investigation.

Even though he was caught on video, Stuart London, an attorney representing Olmeda, said his client denies the accusations “from the bottoms of his feet to the top of his head.”

London tries to deflect the attention from the criminal cop and cast doubts on the underage girl.

“It’s a very heavy indictment, which is evidence of nothing,” London said. “This isn’t numerous underage women. This is one underage woman, and we don’t know her credibility at all.”

Olmeda is facing a huge list of sex offense charges including use of child in sexual performance, rape and patronizing a minor for prostitution. He is also facing charges for the unauthorized use of a computer and official misconduct after he allegedly attempted to use an NYPD computer to try and see what evidence had been collected against him.

In a search of his apartment, police seized a cell phone, computer, video camera and multiple encrypted external hard drives. Authorities also uncovered a recording in which Olmeda, who clearly appears to know the girl is a minor, urges her not to talk to the police, Assistant District Attorney Meagan Powers noted in court.

Powers said that two other files were also found, including one that had the names, pictures and birthdays of women he had slept with since 1989. Another file was his own investigation into how the Internal Affairs Bureau is investigating him for tax fraud.

Olmeda, who has been with the NYPD for over 3 years, was stripped of his gun and shield and put on desk duty about six months ago. With the arraignment he was formally suspended without pay.