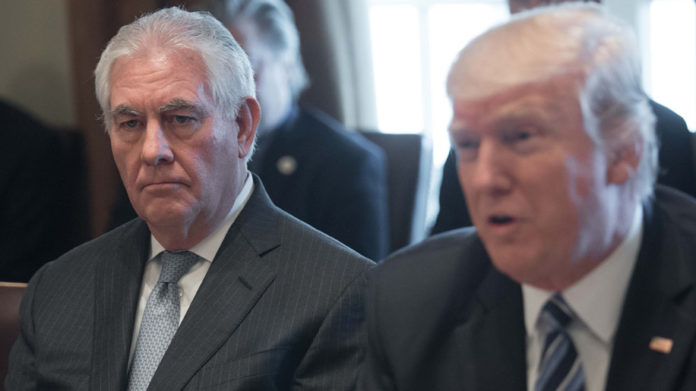 President Donald Trump requested a ridiculous increase in the U.S. nuclear arsenal during the same Pentagon meeting where Secretary of State Rex Tillerson called him a “f*cking moron.”

The president made the request July 20 after he was shown a briefing slide that charted the steady decline in American nukes over the last 50 years, according to three officials who were present for the meeting, reported NBC News.

Some officials who were present said they did not take Trump’s request, which amounted to a nearly tenfold increase in nuclear weapons, as a literal instruction, but they said the comments raised questions about his familiarity with U.S. policy and international treaties.

Trump’s advisers, including the joint chiefs of staff and Tillerson, were surprised by the comments and explained how difficult it would be to legally do such a ridiculous thing.

They informed the president that current U.S. military posture is stronger than it was in the late 1960s, when the American nuclear arsenal was largest.

Trump also complained that his advisers had not yet presented a plan to help U.S. companies “obtain mineral rights”, aka legally steal minerals, in Afghanistan.

He compared the Afghanistan policy review to the renovation of Manhattan’s 21 Club, which closed for a year in the 1980s and hired a consultant whose only suggestion was to enlarge the kitchen.

As the meeting started to disperse, Tillerson reportedly told officials remaining in the room that the president was a “f*cking moron.”

Deandre Harris Is Now Wanted in The Same Charlottesville Attack That Left Him Seriously...