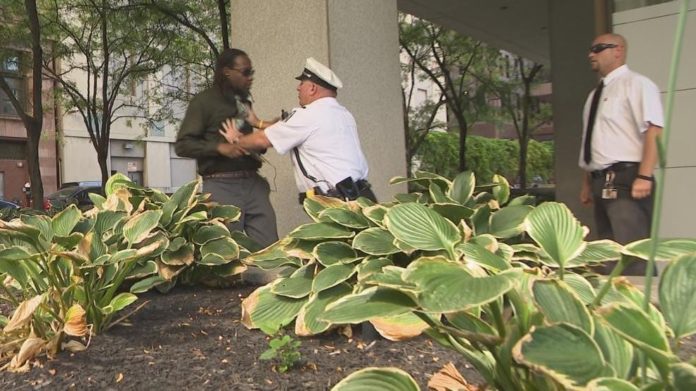 An office worker pushed by a Columbus Police officer says the officer lied in the use of force report to cover up his own excessive force.

ABC 6/FOX 28 recorded video of Officer Shawn Pagniano needlessly pushing Arthur Green outside the Huntington Building September 26th as he tried to get to his job.

Protesters were on the other side of the building protesting against Senator Rob Portman, whose office is inside. Columbus Police were called to help secure the area and to help discourage violence. It turns out the police brought violence and tried to encourage fighting.

In a use of force report, a police supervisor’s review says, “the building owner stated no one but employees were allowed on the property.”

Green, a Huntington employee, said he entered a secured area outside the building to avoid protesters on the sidewalk when he was confronted by Officer Shawn Pagniano.

Before the video started, there is a disagreement about what occurred. The officer’s narrative in the use of force report said, “Officer Pagniano told listed suspect repeatedly that he could not come through the area. Listed suspect became argumentative and was shouting at Officer Pagniano and continued to try and push by.”

Green says the officer was the aggressor, as can be seen in the video below, and he also says the report has false narratives about the incident.

“It seemed like he wanted an altercation instead of an explanation,” said Green.

The use of force report claims, “If Green had identified himself, there would have been no problems.”

Green says he did identify himself when confronted by the officer.

“The officer and I both identified ourselves the same way, we both had our badges on.”

The officer says it is OK to push innocent people on their way to work.

The report concludes, “The pushes by Officer Pagniano are within policy requiring no further action.”

Green was never arrested and allowed to walk through the secured area after building security talked with officers.

Watch the Fox28 video below: