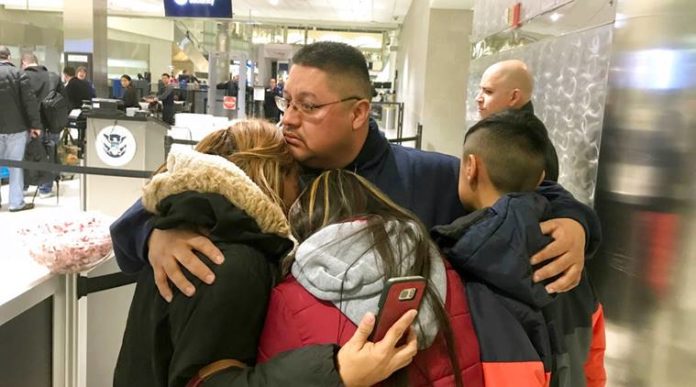 A Detroit father-of-two who has been living in the US for thirty years was deported to Mexicolast week. 39-year-old Jorge Garcia was deported on January 15th, and his wife and two children came to the Detroit Metro airport to bid him a tearful farewell.

Garcia was brought to the United States by his aunt when he was ten and has been living in the country ever since. He married wife Cindy Garcia in 2002, and they have been trying to get him legal citizenship since then. Garcia has been facing deportation since 2009 but was able to get stays under the previous administration. But, with the Trump administration’s focus on “law and order” border policing, his family was informed that he would be deported in November. Democratic Congresswoman Debbie Dingell requested that the date be pushed back so he could spend the holidays with his family.

The family had been holding out hope that the new administration would draft an updated version of the  Deferred Action for Childhood Arrivals (DACA) law, which allowed some people who were brought to the country as children to remain. Garcia was too old to qualify for the 2012 version of the law, which allowed deferred arrivals for people up to 31 at the time. But when the new administration failed to draft a new DACA law,  the Immigration and Customs Enforcement department ordered him to leave. His deportation papers stipulated that he is not allowed to return to the US for at least ten years.

His deportation has been very difficult for his family. “We did not want to put up a Christmas tree because it was way too sad to even get to that point,” his wife told CBS news. “It was rough because we knew he was going to leave eventually. All we could do is make memories.” She also spoke about their goodbye at the airport: “We did not want to let him go. We said our goodbyes, we told him we love you, we’re going to miss you, but you don’t want to let someone go that you love. It’s very hard.”