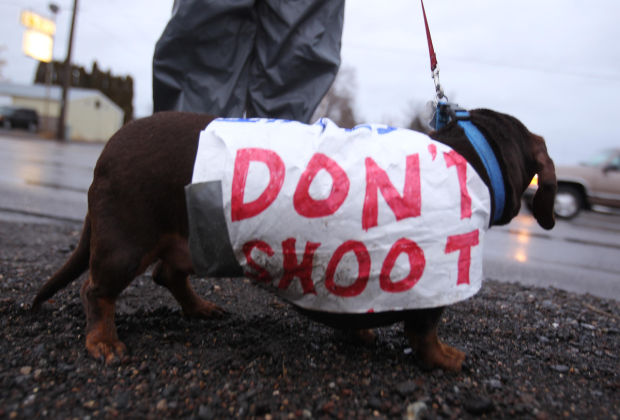 If your dog is the type that barks at dangerous-looking strangers or rushes to your defense if it senses that you’re in danger, you’d best teach it to keep quiet and freeze solid as a rock if it sees men dressed in blue. Even then, you’d best stick a go-pro to it just to make certain that you’ve got evidence proving that your dog wasn’t a threat to anybody before it inevitably gets shot 3-5 times.

The 6th Circuit Court has ruled that an officer can legally execute your dog if it barks or moves in a case where officers shot a dog that “had only moved a few inches” and a second that was “just standing there”.

Although there is no official national database that tracks the number of dogs killed by the police each year, Puppycide records media reports and tipoffs submitted by its readers and has an estimated 3,000 documented cases on its books.

This horrific example shows how little it would take for an officer to be able to justifiably execute an animal.

After it hid in a corner, another officer decided to shoot it again, claiming that it had moved. A third officer found it hiding behind the furnace, observed “blood coming out of numerous holes in the dog, and . . . [Officer Case] didn’t want to see it suffer” and decided to execute it – apparently in order to put it out of the misery that his colleagues had already caused it.

“The standard we set out today is that a police officer’s use of deadly force against a dog while executing a warrant to search a home for illegal drug activity is reasonable under the Fourth Amendment when, given the totality of the circumstances and viewed from the perspective of an objectively reasonable officer, the dog poses an imminent threat to the officer’s safety,” Judge Eric Clay wrote in the court’s opinion.

The court found that the plaintiffs could not provide evidence proving that the first dog had not lunged at the officers and that the second dog did not bark – evidence of this nature is not only impossible to produce, but the officers had already admitted to firing at a dog that had only been barking – an interpretation of imminent danger that when extended to people could be interpreted as a man facing away from the officer and shouting at someone.

Well, officers already execute people who aren’t even capable of shouting… or hearing for that matter, so really they need no credible excuses. Afterall, they know full well that justice is truly blind, mute and deaf… to their wanton misuse of their firearm.

When it comes to dogs and people, officers have every incentive to shoot first… just so that you won’t be able to ask any questions later.

Police Blast Man out of His Van with Fire Hose Then Kill Him –...