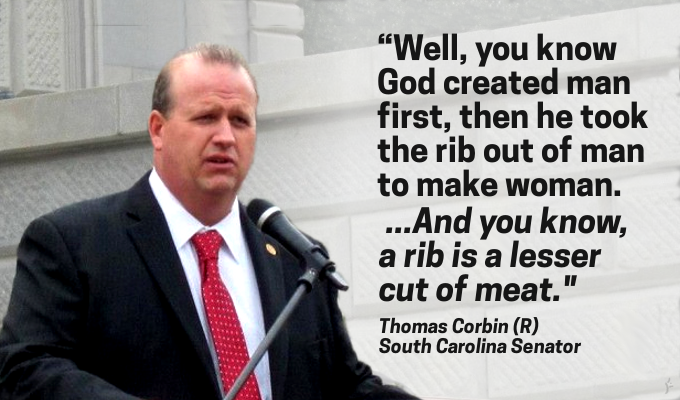 During a working dinner with other lawmakers last week discussing legislation aimed at curbing domestic violence, Corbin made some despicable insults directed at women in general, and his colleague and fellow Republican, Sen. Katrina Shealy, in particular.

According to reports, when a plate of ribs was delivered to the table, Corbin claimed “they remind me of an old joke.”  Corbin proceeded to call women a “lesser cut of meat,” explaining:

Well, you know God created man first. Then he took the rib out of man to make woman.  And you know, a rib is a lesser cut of meat.

According to reports, while making his rude remarks, Corbin was smirking at Shealy. Adding insult to injury, Corbin went on to abuse Shealy further by saying:

I see it only took me two years to get you wearing shoes.

“Wearing shoes” is apparently a reference to the fact that Corbin has repeatedly expressed his belief that women should not be serving as elected officials or even working at all, but instead should be at home, “barefoot and pregnant.”

Witnesses report Shealy became angry and asked Corbin where he “got off” attacking her. Shealy reports that she told Corbin:

You’ve pushed me far enough. I worked three times harder than you did to get here. I deserve respect, and I’m going to get it.

Shealy is the only female member of South Carolina’s 46-person State Senate.

On her Facebook page, Shealy called Corbin an “idiot,” writing:

I have proven that women can effectively serve in the Legislature, and one of my colleagues has proven capable of talking like an idiot.

This isn’t the first time Corbin has made sexist remarks around his colleagues. A Senate staffer reports that he makes sexist comments “all the time to everybody.”

Corbin identifies as a conservative Christian, and insists he was only joking. However, his degrading insults are not funny, and only reinforce the notion that Republicans have contempt for women, even when those women are fellow Republicans.

Women Are To Blame For Pedophile Priests – Anti Media News