Home News US General claims Jesus, armed with an assault rifle, will return 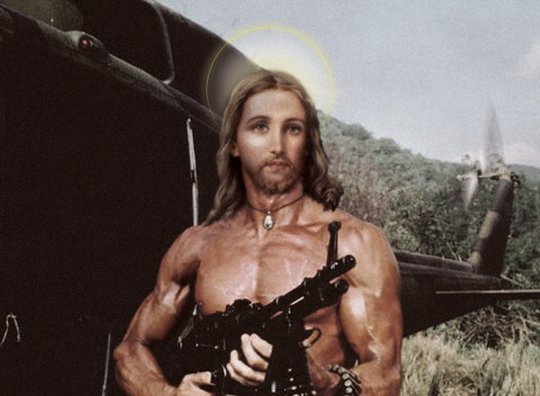 Right wing Christian fantasy: Jesus is coming back, and he’ll be armed with an AR-15 assault rifle when he returns, according to Lieutenant General William ‘Jerry’ Boykin.

Boykin, a retired lieutenant general and executive vice president of the Family Research Council, spoke at the WallBuilders’ Pro-Family Legislators Conference last week. There he declared that when Jesus comes back, he’ll do so carrying an AR-15 assault rifle.

The following is an excerpt from his remarks:

The Lord is a warrior and in Revelation 19 is says when he comes back, he’s coming back as what? A warrior. A mighty warrior leading a mighty army, riding a white horse with a blood-stained white robe … I believe that blood on that robe is the blood of his enemies ’cause he’s coming back as a warrior carrying a sword.

In the same speech Boykin also argued that Jesus was responsible for the Second Amendment to the U.S. Constitution:

Now I want you to think about this: where did the Second Amendment come from? … From the Founding Fathers, it’s in the Constitution. Well, yeah, I know that. But where did the whole concept come from? It came from Jesus when he said to his disciples ‘now, if you don’t have a sword, sell your cloak and buy one.’

Huff Post reports this is far from Boykin’s first controversial statement. He landed himself in national news in 2003, when it was revealed that while serving as a top Pentagon adviser to the Bush administration, he would regularly tell church audiences that the post 9/11 “war on terror” was, in fact, a spiritual battle between Muslims and “Christian America.”

While Boykin’s deluded Christian fantasy of a “Rambo Jesus” is an amusing perversion, the fact that this religious lunatic once commanded U.S. troops is a truly frightening prospect.

OUTRAGEOUS!! NYPD Duct Tape Black Man & Put Him Inside A Body Bag WHILE...

[Video] Baltimore Cops Assault 16 yr Old Who Was Threatened With A Knife –...