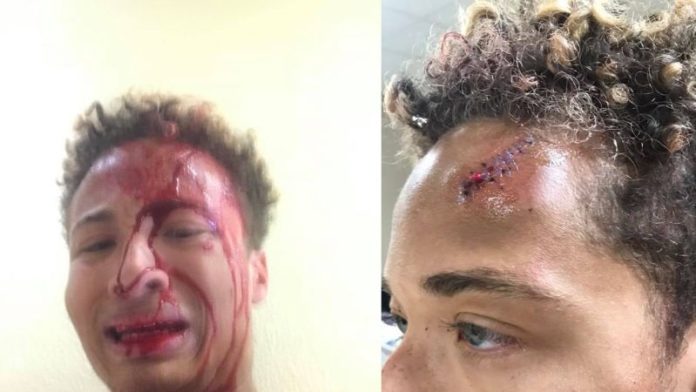 The mother of a Central Arizona College student posted pictures and details on social media of the attack against her son by campus police.

Facebook user Kai Trigg said her son apologized when a resident adviser in his dorm saw him skateboarding in the dormitory hallway.

She said her son put the skateboard in his room, but the RA wanted him to give up his personal property. He refused to give up his skateboard, so the RA called over a campus officer that happened to be coming out of another room at that time.

Trigg continues, saying her son held out his hands so the officer, whom she identified as an Officer G. Terry, wouldn’t be suspicious or fear for his life from the unarmed man. He also called his mother on speakerphone because he was afraid.

That’s when, Trigg says, Terry grabbed the teen’s hands and, according to Trigg, “twisted it behind his back and then his left and held them with one hand.”

That is when the officer needlessly assaulted him:

[T]he cop then used his other hand to SMASH my son’s head into the brick wall and down to the floor… My son lost consciousness… he woke up on the floor covered in blood and tried to start video on his phone, there was too much blood to swipe to video and the phone could only snap the photo above … the one where he is crying. He was screaming to me that his head was split open and saying he didn’t want to get killed, asking the first cop, Officer Terry, to please step back from him.

At this point the second cop showed up, he’s black, and called an ambulance… the cop who assaulted him took my son’s phone, I asked what was going on and why this was happening and I said, “Please don’t kill my son” I told them he has anxiety attacks and has pills in his room that will help calm him. The cop hung up or dropped the phone. … All I could hear was my child screaming for me … line went dead. I called back 4 times before my son answered, he was with paramedics, she got on the phone and told me to meet her at the hospital.

Trigg said there were no charges filed against her son, and he was not arrested.

Trigg’s son was confused because he did everything they say people should do NOT to be assaulted by police, but they beat him anyway.

My son got 8 stitches and the entire time they were sewing him up he kept asking, “Why did he do that to me mom? I cooperated. They said if you just give them your hands and cooperate they won’t hurt you. He hurt me mom”

Campus are allegedly reviewing video of the incident. The police version of the incident is that the man walked toward the officer with his hands out, so the cop beat him.

Trigg told The Root that the Central Arizona College Police Department has asked her to remove the Facebook post because they are “receiving too many phone calls to be able to work the case.”

You can contact the Central Arizona College Police Department to let them know what you think about their officer’s actions.

Skies To Be Openly Sprayed With Toxic Metals This Weekend, Blocking the Sunlight –...

Uber Bans Racist For Life After She Threatens To Falsely Accuse Driver Of Rape...