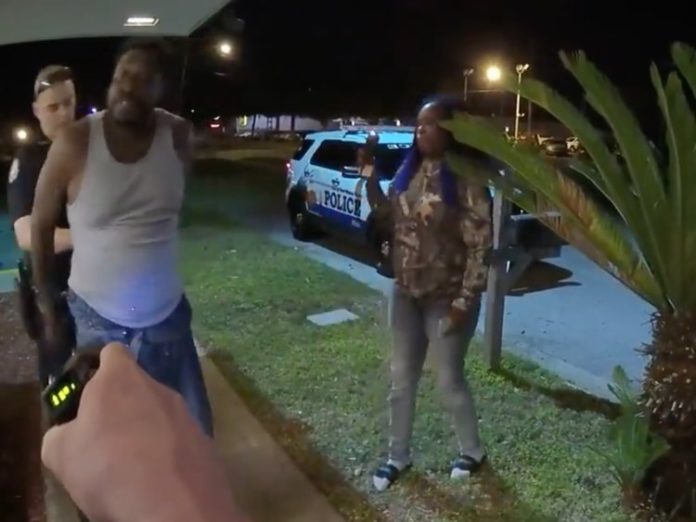 That’s why the charges were dropped. It’s not theft.

They simply wanted clarity on why they were overcharged a $1.50.

Don’t you dare step your foot into a @WaffleHouse again. Do you hear me?

Let me give you the facts here.

1. This couple never even received their food
2. It was a to-go order
3. They disputed a $1.50 charge on the receipt
4. Waffle House called the police – who arrested them. pic.twitter.com/PLXog5WDTO

After officers arrive, Copeland says something to one of them about “putting hands on me,” and the officer immediately threatens him: “Oh, I’m going to put my hands on you?! Get out of here. You want to trespass?”

As the couple tries to explain their side of the situation, the officer continues to taunt Copeland, saying, “You should come out here and talk like a man.” When Copeland walks forward to do just that, the officer changes his mind and says, “Back up.”

As Copeland was obeying the officer and walking outside, another officer pulled a taser and threatened Copeland.

The officers never seem to try to hear both sides of the argument, they just immediately took the side of the employee and did not listen to Copeland and Hart, who still did not receive any food.

One of the officers tells the couple, “If you don’t pay your bill, you’re going to jail.”

Copeland and Hart were both handcuffed as Hart cried and said, “I didn’t do nothing wrong.”

To avoid criminal charges, the couple ended up paying the bill and they were released after agreeing not to return to that Waffle House.

The officer then suggests that he is helping them, “I’m doing you a favor by not taking you to jail right now.”

A cell phone video has recently been circulating on Facebook regarding an incident that occurred at a local restaurant on May 2nd, 2018. Our officers responded to 318 Miracle Strip Parkway, SW, at 0129 hours in reference to a disorderly incident between staff and a customer. So we feel it is important to set the record straight and have attached a link below of the officer’s body worn camera, where citizens can view the video in its entirety. The Fort Walton Beach Police Department conducted a full review of the incident and the actions our officers took that evening. Video from the officer’s body worn camera was reviewed in its entirety and conveyed our officers followed proper protocol when dealing with violations involving Florida State Statues [sic]. The cell phone video being shared only shows a small part of the incident and does not include that the individuals detained were released after the situation calmed and the bill in question was satisfied – which is what the officers were trying to achieve from the beginning. We met with other interested parties in regard to this matter and all parties involved determined that while there was no misconduct of the officers that the situation could have been handled differently by both parties involved. The Fort Walton Beach Police Department strives to provide superior police services to all citizens and uses opportunities such as this to learn and refine our interactions with the public.

Cops Trying to Kill a Dog, Kill Innocent Boy Who Tried to Save It...