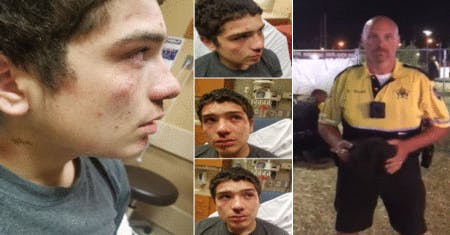 Dominic says the officer did not say anything before attacking.

“I think it just went to physical right away. He didn’t say anything to me,” Dominic Garibay said.

Dominic feared for his life as the officer choked him, “Once he started choking me I was trying to break free because I couldn’t breathe, I was just trying to get air,” Dominic said, “I thought… I don’t know, I thought I was going to… die. I couldn’t’ breathe at all.”

Elizabeth walked up to find her 15-year-old son pinned against the ground as police. At that point his brother started recording on his cell phone.

In the video, Officer Picari threatens to assault Carl also, “Take one more step towards, you’ll be next,” Picari says. The officer then moves around to block the view of his video as he plays with handcuffs, trying to intimidate Carl.

Police say they have recordings of what happened from body cameras, but they have not released the footage.

Hundreds Of Millions Of Salmon Disappear On West Coast Of US – Anti Media...