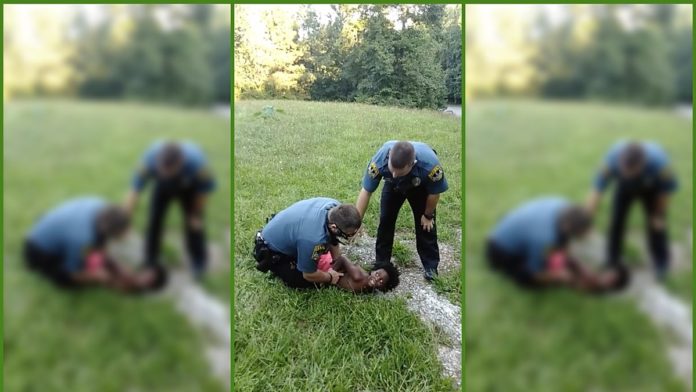 At one point, the child even stands by the patrol car and says, “you’re not going nowhere.” He then shouts “what? What?” at an officers, who replies: “Don’t do it, man.”

The child runs toward the police car as his father was being put in the back. An officer grabbed the child, carried him to the grass, and threw him on the ground, pinning him down with his hands behind his back.  The officers then tell the child to stop resisting as the child apologizes and says he does not want to go to jail.

Rodriguez said, “While on the ground, the officer continued to attempt to de-escalate the situation, assuring the child that he was not under arrest and that he would let him up if he would remain calm.”

After the boy apologized, the officer released his arms and let him get off the ground.

Family members say the child never attacked the officers, who they claim were unprofessional in their behavior toward the 10-year-old.

11Alive reported the child is Eric Collins and his father is Jawoski Collins. The child’s grandfather said the officers involved: “They should be fired because if they do one child like that, they’ll turn right back around and do somebody else’s child. They could do your child like that. Your child. Anybody else’s child like that if they can get away with it. I trust and pray that the police will take it under consideration what he did to that child and fire him.”

New Bill Seizes Assets of Anyone Who Plans or Participates in Protests that ‘Disturb...