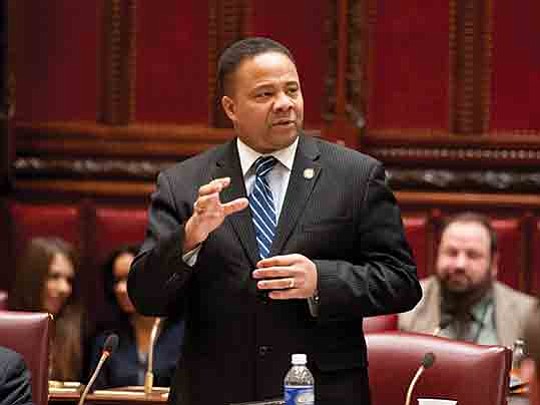 Hamilton announced his bill a week after the incident, saying the calls are an attempt at intimidating black people.

This incident is just 1 more in the growing problem of racism in the U.S.

Donte Robinson and Rashon Nelson were arrested at a Starbucks in Philadelphia while waiting for a friend.  A white woman, dubbed “Barbecue Becky”, called police on black people because they were barbecuing at a park. Black people, even children, have had police called on them for selling water, delivering newspapers, mowing lawns, installing cable, taking a nap, and simply for being at their community pool or doing basic daily activities.

“Waiting for your friends at a Starbucks is not a 911 call — it’s a call of intimidation,” said Hamilton. “That’s gonna be a hate crime. This pattern of calling the police on Black people going about their business and participating in the life of our country has to stop.”

“Living while black is not a crime,” Hamilton said. “But making a false report, especially motivated by hate, should be. Our laws should recognize that false reports with hateful intent can have deadly consequences,” he added.

“The pattern of targeting Black men and women for being Black and alive in the communities we all share has to stop,” said Hamilton.

New York law already states that false calls to police is a crime. The proposed bill, if passed, would allow the victim an opportunity to prove the false call was made with a hateful or discriminatory intention, and would make it the false call a hate crime.